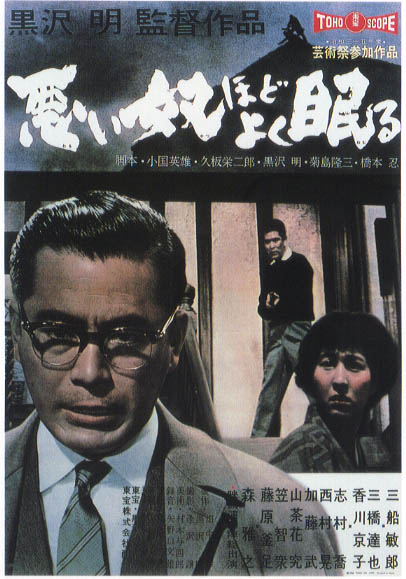 Kurosawa’s 1960 movie “Warui yatsu hodo yoku nemuru” (initially released in English as “The Rose in the Mud,” but long known as “The Bad Sleep Well,” an understatement of the Japanese title which more literally would be “The Worst Sleep the Best” or “Only the Bad Sleep Well”) is a variation on “Hamlet.” Those familiar with Kurosawa’s historical dramas (and/or with the Samurai trilogy) would not expect the fiercely glowering Mifune Toshiro to play Hamlet, even after having played Kurosawa’s interpretation of Hamlet. Those not familiar with Mifune in such roles cannot appreciate the disguise as a meek-appearing executive secretary in “Bad.” Although his character, Nishi Koichi, is not a milquetoast and has some opportunities to use the Mifune snarl, part of the enjoyment of the movie (as of “Red Beard”) is watching the tiger self-suppressed (“tame” would be too much of an exaggeration!).

Also, those not familiar with the iconic Mifune would be less amused by the bravura opening of the film, Koichi’s wedding to the daughter (Kagawa Kyôko) of his corrupt boss Iwabuchi (Mori Masayuki) in which Koichi/Mifune is glimpsed, but is not heard for more than half an hour. Viewers familiar with Mifune’s usual roles wonder why he is so buttoned down and those unfamiliar with them might not notice him.

Although members of the press outside the wedding provide the names and corporate positions of the most important wedding guests, the viewer does not know what is going to emerge from the wedding assemblage (surely, this was an influence on the opening of Coppola’s “Godfather”). After some unusual wedding toasts, a large cake in the shape of an office building is wheeled in. There is a black rose sticking out of a top-floor window. The sight of is shocks or terrifies several of the corporate bigwigs (the most familiar of whom is Shimura Takahashi, leader of the “7 Samurai,” and star of “Ikiru”).

The viewer who goes along with not knowing what is going on during the wedding eventually sees in retrospect that the cake is the equivalent of the play Hamlet arranges for the court. Kurosawa’s variation has considerably less of what Freud(ians) found most interesting in “Hamlet,” because both of Koichi’s parents were dead before the start of the narrative. He plots revenge for those who caused his father to die, but Koichi has much more of a filial relationship with his father-in-law than he ever had with his father (who married his own boss’ daughter rather than Koichi’s mother, which to me makes him more the careerist stand-in for Claudius).

Until far into the movie, Koichi has none of Hamlet’s indecision. Rather, he has a well-thought-out plan for avenging his father and revealing the corrupt miscreants of a large and very corrupt development company, his father-in-law in particular. Eventually, however, Koichi’s ruthlessness wanes and he feels sorry for (and/or comes to love) his still virgin bride (at least as innocent as Ophelia, though the spawn of an evil man rather than a sententious one as Ophelia was).

Until then, Koichi has broken laws with impunity for the greater good of exposing corruption (further justified by filial piety and avenging his father who was driven to suicide by the cabal of corrupt contract-grubbers). In bringing down utterly ruthless men, compunctions can be fatal, and the title has already warned that the movie is not going to have a Capra-like ending in which the good people are rewarded and the bad ones taken down. Still, the extent to which love and compassion are punished is a hard pill to swallow. The Karl Roves of the film do not hesitate, and, not only win but sleep well (… though who sleeps more soundly than the dead?) Revenge comes to seem a very chilly dish, which is dropped by pausing to reflect on its costs to the innocent.
Before leaving the protection of the plot spoiling warning , I can perhaps also note that ruining his own life and that of a woman who has done nothing to harm anyone and suffered a great deal from a crippling accident (and the Japanese distaste for “damaged goods” and such horrible portents as stumbling at her wedding…) to avenge a father who abandoned Koichi and his mother to climb the corporate ladder and who was embroiled in the corruption is a quest more dubious than noble. I’m not sure of the Confucian view about how much filial piety is owed to a biological but not social father who was part of a conspiracy of corruption against the social order, so there may be a significant culture difference underlying my difficulty of admiring what Koichi tries to do. 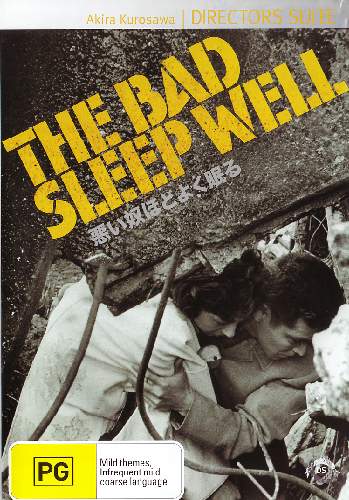 After the brilliant (though intentionally bewildering) opening, the movie goes on too long (151 minutes) with far too much telling what happened, and too little showing. This is puzzling in that Kurosawa generally was interesting in the hows (and, thus in showing, not telling). Not that there isn’t some action, including kidnappings and making corporate officials think they are seeing ghosts. There is one particularly astonishing juncture in which Mifune seems to rise out of a bubbling volcano. Plus Kurosawa’s fascination with using the wide screen to its widest extent (with action going on at both far sides) is frequently on view(credit the great cinematographer Aizawa Yuzuru).

The acting is generally top-flight, with the exception of a rant by Itakura (Tako Takahashi) near the end (the blame for which I do not assign the actor). Mori Masayuki is especially good at the remorseless robber baron. Shimura Takahashi has an opportunity (legitimately) to act out. As the rose in the mud, Kagawa Kyôko, is very affecting, Mihashi Tatsuya, as her brother and Koichi’s friend and best man, is also quite good as the hot-blooded scion of a reptilian father.

Although there is much to admire—not least Kurosawa’s outrage at bribery, graft., etc. as the worst of crimes—this is not one of my favorite Kurosawa films (the only one of the twenty that I’ve seen that I like even less is “Dodesukaden” from 1970). I particularly don’t like some of the music: either what Mifune whistles or the carnival music that pops up at incongruous times (though the music in the wedding opening is very fitting and effective.