I saw Robert Aldrich’s 1965 plane crash in the (Tunisian) desert movie “The Flight of the Phoenix” when it was newish and I was fifteen. Since then, my attention span has lessened and watching it again, I thought its 149-minute running-time excessive and the makeup (blistered faces) risible, BUT the conflicts among its all male characters and, in some cases grudging their co-operation to build an airplane from the wreckage as envisioned by an arrogant German (played by Hardy Krüger (who was so diffident in “Sundays and Cybèle”) remains absorbing. The captain (James Stewart in his flawed and bitter tough guy persona rather than the aw-shucks Jimmy Stewart) blames himself for flying into a sandstorm in a plane without a functioning radio. That defect relates to his alcoholic navigator/steward, played by Richard Attenborough. Their relationship seems lifted from a Howard Hawks movie with Attenborough playing something like the part Walter Brennan played in “To Have and Have Not” (or Thomas Mitchell back further in “Only Angels Have Wings” and Stewart more fallible than Humphrey Bogart and Cary Grant in those two Hawks movies. 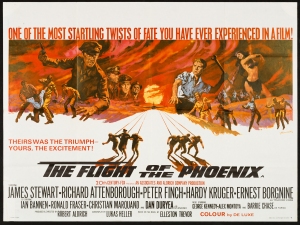 Of course, Aldrich made a number of movies focused on male-male rivalries mixed with ambivalent co-operation, including “Vera Cruz,” “Attack!,”,” “The Longest Yard,” “Twilight’s Last Gleaming,” and “The Dirty Dozen” (which would be his next movie, released in 1967, with an overlap of three actors who were in “Phoenix”: Ernest Borgnine, George Kennedy, and Gabriele Tinti; Borgnine was more memorable as the extremely nasty scourge in Aldrich’s great but underrated “Emperor of the North Pole” in 1973, and had also returned (with Peter Finch and Gabriele Tinti) in Aldrich’s (1968) “The Legend of Lylah Clare”).

In addition to the flight crew (Stewart and Attenborough) chafing against the self-confident expert (Kruger), there is an insubordinate sergeant (Ronald Fraser) attached to an oblivious, hidebound officer, Captain Harris (Peter Finch), a wacked-out Ernest Borgnine eager to follow Harris “marching” across the Sahara (even while Sgt. Watson fakes being unable to walk), a cast-against-type milquetoast Dan Duryea, a heroic physician (Christian Marquand), and a badly wounded handsome Latin martyr (Gabriele Tinti). Inexplicably to me, the one who garnered an Oscar nomination was Ian Bannen (whom I thought was better in “The Hill”). (Krüger or Attenborough would have been better choices IMO. Krüger refused a Golden Glob nomination and the Academy voters probably took the hint.)

The estimable Joseph F. BIroc (who had lensed Stewart’s most beloved movie, “It’s a Wonderful Life” and would do more memorable desert work in “Blazing Saddles” (1974) (not to mention “Airplane!”, “Towering Inferno,” and Aldrich’s “Hush, Hush, Sweet Charlotte” and “The Longest Yard”, “Ulzana’s Raid,” etc.) shot the Arizona and California desert locations and the motley cast. Frank DeVol provided too much overwrought music (musical minimalism had not been invented yet, though Robert Bresson for one made movies with minimal musical underlinings). Aldirch’s usual (15-time) editor Michael Luciano (Oscar nominated for this and three other Aldrich movies, for two of which he won his own guild’s award) was deft with the action sequences, but could have cut more IMO.