Andrew Lam‘s “Reflections on the Vietnamese Diaspora,” primarily his own family’s, contains memoirs and reportage published between 1990 and 2005. Some of these (especially “Notes of a Warrior’s Son” and “The Stories They Carried”) are outstanding. Others are slight; “Two Passports,” is particularly disappointing, ending the collection with wistful whimpers rather than a bang.

Perfume Dreams is unsatisfactory as a book, because the basic lineaments of the author’s story—growing up in the South Vietnamese elite, the son of a lieutenant general in the Army of the Republic of Vietnam, being evacuated with his family two days before the fall of Saigon (when he was eleven years of age, facing the loss of status in America, struggling with the English language and American culture, the father arriving a bit later, being deeply depressed, then rallying, earning an MBA and lifting the family to suburban affluence—are repeated and repeated and repeated.

The pieces reflecting on those experiences show that Lam could write a compelling memoir of the status roller coaster of his life and his relationships with Vietnamese in Vietnam and in the US. But he hasn’t.

Some of the pieces are primarily about experiences of others, most notably “The Stories They Carried,” which is a report from a Hong Kong refugee camp for Vietnamese “boat people,” most of whom were being sent back as “economic refugees” rather than political refugees. Lam’s own feelings as a privileged American citizen (exacerbating his survivor guilt) are very much a part of the piece, though it is primarily about the stories of suffering of those who fled Vietnam later than he did being ignored, disbelieved, and disrespected. “Viet Kieu” (Vietnamese-American visitors to Vietnam) is another very impressive piece that is primarily about others, but with the compassion of someone very well aware of his luck.

Although very impressionistic and open to suspicions about bias, Lam’s contentions about the fading of Vietnamese identity in Vietnam are interesting hypotheses.

I also have to grant that Lam produces some good hooks for his essays, for instance, this from “The Dead Travel”:

“‘Til death do us part,’ that age-old marriage vow, has to Confucian ears always sounded a little, well, noncommittal, In Vietnam, death is not the end of relationships, it only deepens them.”

(What follows provides insight into how ancestor worship works, although its primary focus is Lam’s maternal grandmother’s relationship to her dead husband, whose grave she tended and which she was very reluctant to leave to flee to America in 1975.)

As a book, Perfume Dreams is inferior to Catfish and Mandala (in which memoir is integrated into an account of a Vietnamese-American traveling through Vietnam), or Pascal Thwe’s From the Land of the Green Ghosts: A Burmese Odyssey, or the pair of memoirs by (Cambodian-American) Loung Ung: First They Killed My Father (about surviving in Cambodia, the daughter of a high-ranking officer) and Lucky Child (about humiliations in America, success in America, visiting family back in Cambodia).

The reflections on what it means to be a general in a war that ended in defeat and exile are insightful—and quite pertinent here and now. Lam expresses dismay that American representations of the war in Vietnam do not show any bravery or honor in the ARVN and its officers, showing a war between American troops and Viet Cong and North Vietnamese troops.

Actually, the ARVN is not so invisible in American representations. Rather, its officers are portrayed as brutal (killing prisoners), corrupt (profiteering), and unwilling to fight (throwing away weapons and fleeing under any fire, like the Kuomintang army during the late 1940s). Decrying invisibility rather than hostility, Lam does not comment on the negative portrayal.

And this reader is not willing to take on faith that Lam’s father’s hands were clean. I don’t mean killing people, which is what soldiers do. The sentence that caught my attention was the recollection of his father calling in napalm. Lam’s relationship with his father seems too fragile to have candid discussion about war crimes—or whether his father was complicit in torture as well as involved (ordering) the use of napalm on his countrymen.

I would still rate “Notes of a Warrior’s Son” a five-star essay. My rating of the book is lower for its failure to attempt to integrate the slivers of journalism into a memoir, the repetition, and the thinness of some chapters.

(The book comes with blurbs by Robert Olen Butler and Maxine Hong Kingston and a quite useful foreward by Richard Rodriguez. Lam is a journalist, an editor with the Pacific News Service, who, like Rodriguez, frequently comments on “All Things Considered” on NPR.”) 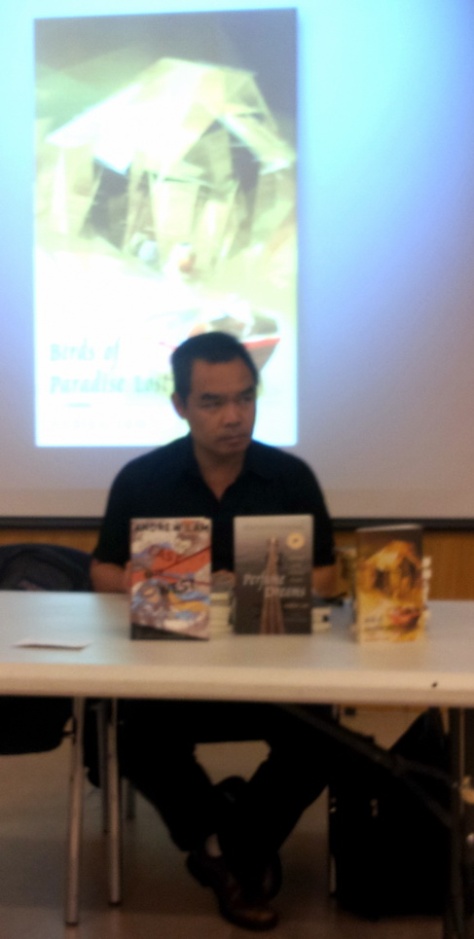 (Lam at San Francisco Public Library with another, better book)