There is nothing supernatural in Nomura Yoshitarô’s 1978 “Kichiku” (another Nomura adaptation of another story written by Matsumoto Seichô), which means“The Demon.” Human beings do bad things to children in the movie and Chinese/Japanese characters do not indicate singular/plural, but, if I had to single out the most despicable of the adult characters, it would be Oume (Iwashita Shima, who was part of the Ozu repertory company and married Shinoda Masahiro in 1967; she also starred in Nomura’s “The Shadow Within”). I’ll readily grant that she has substantial reason to be pissed off when Kikuyo (Ogawa Mayumi), the mistress for the last seven years of her husband, Sôkichi (Ogata Ken [who played the title role in “Mishima,” the son carrying his mother up to die in Imamura’s “Ballad of Narayama”, and the murdererer in“Vengeance Is Mine”], who received no less than six best actor awards for his performance) shows up and dumps off three children. Oume does not want to believe that the children, ranging in age from 2-6, are her husband’s offspring. They are definitely strangers to Oume, and very, very, very unwelcome ones, constant reminders of his infidelity.

The crisis was stimulated by lack of any profits from the print shop that Oume, more than Sôkichi, runs, although he is the experienced lithographer, we will later learn, having been forced to start working at the age of ten with any earnings going to his deeply-in-debt uncle. Sôkichi’s vivid memories of being an abandoned and abused child have some effect in making him a nurturing father, but that is not just offset but viciously opposed by Oume, who is the archetype of the wicked stepmother, furious at the very existence of the three children another woman bore her husband, while she was unable to produce a child.

Oume manages to kill the youngest one and make it look like an accident (smothering), despite a hospital record of malnutrition for him. Yoshiko’s father takes her to the top of the Tokyo Tower and leaves her there, which gets her out of the path of Oume’s wrath. Six-year-old Riichi (Iwase Hiroki) knows his father’s name and address, so cannot be left somewhere. Also, he strongly suspects that the stepmother who is especially brutal to him killed his younger brother. Riichi speaks little, but his reproachful gaze says a lot. Iwase’s performance is very strong in that he also shows devotion to his father and a joie de vivre when away from Oume’s persecution. That is, he is not just a traumatized tyke. He is capable of playfulness. 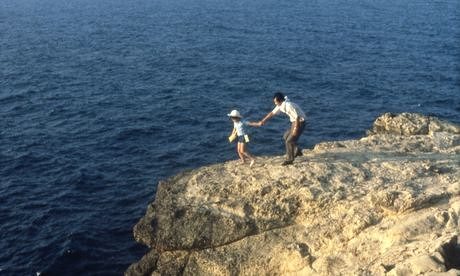 Like late Kinoshita movies, the movie gets around the country—by train and bus. (Blessedly, there are no folk songs, though! The music, especially in the second half, seems Hitchcockian, which is to say Bernard Hermann-like.) I think there is more travelogue than police procedural in the movie, though eventually there is a police investigation. Though based on a 1957 story by Matsumoto Seichô, whose fictions were also the bases for Nomura’s “Stakeout,” “Zero Focus,” and “The Castle of Sand” (plus four more Nomura films I haven’t seen), “Demon” is not a detective story. (I’d also say that it was more an early-1950s than a late-1970s story of small businesses being crushed.)

I’m not sure Sôkichi is shamed into taking responsibility for his offspring. It seems to me he loves them, though recognizing some justice in the fury of his wife and his mistress toward him as an insufficient provider. Guilt toward his wife keeps him from condemning her inexcusable (indeed criminal) action and colluding in covering up her murder of his youngest child. Also, she is indispensable to the survival of his printing business, tenuous as that business has become. (And while not condoning abandoning children, one can understand Kikuyo being fed up trying to feed and care for three young children with far too little money. This is desperation, not demonicness IMO, though similarly put-upon women uncomplainingly fulfilled their maternal duties in many a Mizoguchi and Naruse movie.)

Kawamata Takashi (who had also shot “Castle of Sand” and “The Shadow Within” for Nomura) did great cinematographic work with natural light; the strong visuals have survived without bleeding or dilution.