Along with Edward Weston (1885-1958), Paul Strand (1890–1976) is my favorite photographer. Both were pioneers of very sharp-focus semi-abstractions, breaking with the gauzy pictorialism of Alfred Stieglitz (1854-1946) et al. Both photographed people as well as objects and landscapes, Weston mostly portraits and nudes, Strand portraits and photos of group. Plus Strand shot movies, most notably “The Plow That Broke the Plains” (1936), which he did not direct, and “Native Land” (1942), which he did. Strand and his friend, the painter Charles Sheeler, also made the pioneer urban documentary “Manhatta” (1921).

I don’t recall who in the 1989 documentary “Strand: Under the Dark Cloth” remarked that Strand didn’t talk about himself, though he was articulate talking and writing about photography in general and particular photographs and series of photographs he took. A very old Georgia O’Keeffe and a not-as-old widow, Hazel Kingsbury Strand, express views of his personality as well as his work in interview segments in the movie, along with Strand’s movie-making partner Leo Hurwitz, but I came away with no sense about the person other than that he was very focused on his work and that he was a man of the left, working on the anti-Fascist (pro-Republic) “Heart of Spain” (1937), and pro-union. 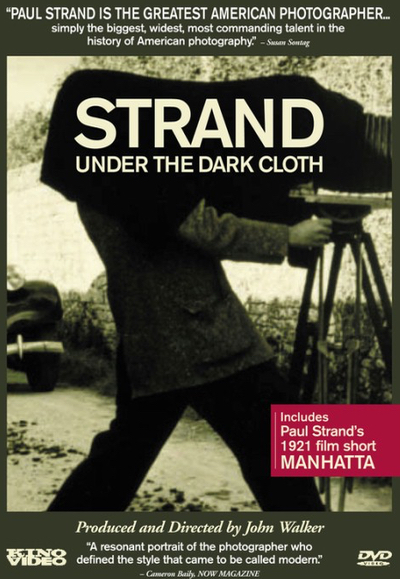 Rather than “in-depth” in any psychological or political sense, the movie provides extensive review of his work, both film clips (whetting my appetite to see the 1936 Mexican fishermen movie “The Wave”) and still photographs, including some of my favorites (the Italian peasant family on their doorstep) and many I don’t recall having seen previously.

I’d have no problem with an 81-minute Strand slideshow, but with access to opinionated people who knew the great photographer, I wish probing and/or follow-up questions had been asked. In particular, the last Mrs. Strand, who was herself a photographer when she met him and helped him, especially as he developed arthritis and was eventually house-bound (photographing their garden) says that she came to loathe photography and stopped photographing. How could an interviewer fail to ask her to explain and elaborate?

I found the music, credited to Québecois composers Jean Derome and René Lussier not quite grating, but at least annoying. Perhaps if I had not been listening to one of the greatest movie music masters, Bernard Hermann, I might have been less annoyed?

At any rate, I would recommend the photographs of Paul Strand to anyone unfamiliar with them, the slideshow and film-clip aspects of the documentary. IMO, the movie, directed by John Walker (A Drummer’s Dream), written by Seaton Findlay (Janis) coulda/shoulda been more engaging, aloof and unrevealing of his personal feelings as Strand was.