For me, Kore-eda Hirokazu (1962-), the second best-known current Japanese film director (after Miike Takashi) is overrated. I was surprised that his sluggishly paced “Shoplifters” won the 2019 Palme d’or, although that is not the first head-scratcher choice of its top award from the Cannes Film Festival. (He had won the Jury Prize there in 2013 for “Like Father, Like Son,” a movie I like more). It was also Oscar-nominated in the best foreign-language movie category.

I was immediately put off by the opening scene in which the father-and-son shoplifting team of Osamu (Franky Lily, Like Father, Like Son, Our Little Sister) and Shota (Kairi Jyo) take a lot of stuff. Osamu’s rationalizations that it’s OK unless they take so much a store goes bankrupt and that items do not belong to anyone until they are sold irritate me, especially since they are not countered by the fact that theft raises the price for real buyers. (Admittdly, Osamu works as a day laborer when he can, but on-the-job injury is not convered by disability insurance.) 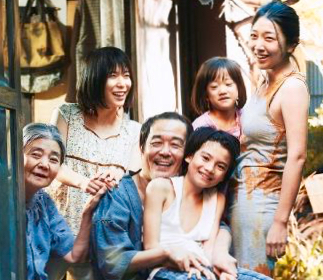 On the way home, the exultant thieves buy five croquettes. Then they find a young girl locked out in the cold. They take five-year-old Yuri (Sasaki Miyu) home with them, feed three of the croquettes to her and begin treatment of the wounds from physical abuse.

When they go to take Yuri home, they hear Yuri’s parents arguing, with both exclaiming that they never wanted a child. So they take Yuri back with tme. By that time we have met the snappish grandmother, Katsue (Kiki Kirin, in her fifth Kore-eda film) is as close as there is to a mastermind for this group, and the one with isteady income (a widow’s pension) and the pretty Aki (Matsuoka Mayu), who works displaying herself to men (is this “sex work” with no sex involved?)

It took me half the movie to realize that Shota is a boy, not a girl. He has carved out a space for himself in a closet, using a headlamp to illuminate the mangas he reads. The whole family goes to the beach (supplying the poster photo). But then things start to go wrong for the de facto family (family of choice), including the grandmother’s death.

That pushes the movie even more firmly into early Hou Hsiao-Hsien territory — especially “The Boys of Feng-guei” in which three boys staying with their grandmother do not know what to do when she dies, so do nothing, leaving her rotting on her sleeping mat. There is a nominal adult this time, but Osamu cannot do much to protect anyone. The police try to convince Shota that the others were going to abandon him after he was apprehended, though it is not clear to me that he believes them. Indeed, he calls Osamu “dad” for the first time.

The movie is softer than “Nobody Knows” (2004, his best film in my view, followed by “Like Father, Like Son”). and even slower. (Both Hou and Kore-eda proclaim influence from Ozu, which is eertainly there in prolonged takes, but I was never bored by an Ozu film, despite their invariable camera setup of a meter above the floor.)

Discussion of other Koreeda films available on DVD with subtitles in English: