I must be missing something, since I don’t have any difficulty considering “police” potentially to be an adjective, as well as a noun or verb, for instance in “police state” or “police misconduct.” In these examples, it specifies a kind of state, a kind of misconduct, right? And in a very unusual climactic duel between a young police officer and his boss (presumably a holdover from those enforcing the laws laid down by Ceausescu) “police state” is one of the constructions the Romanian dictionary supplies in its “police” entry. The key contested concept is “conscience,” to which I’ll return. But I don’t see anything peculiar or dismaying about the title of the much-acclaimed, award-winning 2009 Romanian movie by Corneliu Porumboiu, “Police, Adjective.”

The pace of the movie is, I think, the slowest of any police procedural I’ve ever seen. Plainclothesman Cristi (Dragos Bucur) follows a Vasiliu high-school student who sometimes smokes hashish but does not sell it. The boy smokes with the agemate who informed on him and an unidentified girl outside the school. Christi’s book (Vlad Ivanov, abortionist of “4Months, 3 Weeks, and 2 Days”) tells Cristi that criminals use the term “squealer,” not those in law enforcement, while Cristi objects to referring to the boy he’s tailing as a “dealer.”

Cristi does not trust the informant/squealer and believes the source of hashish is the boy’s older brother whom the boy will not give up. For whatever reasons, the police captain presses Christi to make an arrest at least for possession.

Cristi pushes back that Romanian law will surely change as those elsewhere in Europe (including Prague, where he recently honeymooned) and that it is an affront to his conscience to ruin a kid’s life (even if he only serves half of the seven-year sentence) or place him in the position of regretting squealing on his brother.

This leads to what is surely the longest sequence of reading definitions from a dictionary in any movie. Trust me, this is a dramatic confrontation! Christi’s definition of “something in me that stops me from doing something bad that I’ll afterward regret.” The dictionary has communist residue in a definition of “conscience” as “part of the social system of a particular class, reflecting its condition of existence.” The captain does not insist on that one and fails to register the inclusion of “moral law” in the entry. As in other Romance language, “conscience” in Romanian also includes what is differentiated as “consciousness” in English, which obscures the discussion.

The captain insists that police follow written laws, not their own sense of conscience (moral laws) and will not allow Cristi’s older office-mate (also presumably left over from the bad old days) to arrest the boy.

Earlier, Cristi and his wife have an extended discussion about what a pop song’s lyrics (Mirabela Dauer’s song “I Don’t Leave You Love”) mean and she explains to him that his surveillance report uses a form that was abolished two years earlier by the Romanian Academy (which polices the language as the French Academy does). 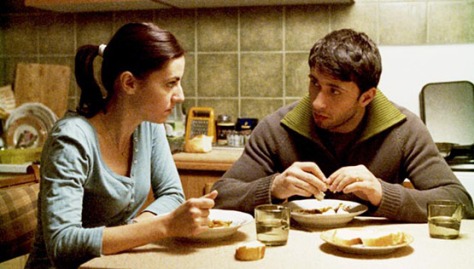 Critical praise has (IMHO) inflated expectations for all three of the Romanian films that have made it onto the art-house circuit (“The Death of Mr. Lazarescu “(2005) is the other). All look drab/verité, proceed slowly, and covertly (though unmistakably!) criticize soulless laws and social systems (past and present: abortion has been decriminalized in Romania). The closest American equivalent to the Romanian film-making (generalized on the basis of three!) is Jim Jarmusch, with drab location shoots of long takes of which not much ever happens and sparse dialogue (it’s not even portentous here).