My recent attempts to read American literature from before the Civil War have not gone well. Short stories by Edgar Allan Poe that I read with rapt interest before I was a teenager seemed interminable to me when I reread them a few months ago. I could only get through the original detective novel by skipping from the first sentence of one paragraph to the first sentence of the next. The meandering sentences in Walden made me impatient, though his smugness grated even more. However, I apparently had no problem with either when I first read the book as a teenager.

The reason for making a third venture into that era was a visit to the original house of seven gables (actually, it was originally a house of three gables) in Salem, and to the house in which Nathaniel Hawthorne was born that has been moved next to it. I thought that fresh memories of the house (and well) might enhance rereading a book that I read when I was 12 or 13 (which is to say, long ago!) and from which I remembered nothing at all except the title and name of the author. Though discouraged by my rereading of Poe and Thoreau, I thought there was a better chance for The House of Seven Gables, because I reread The Scarlet Letter a few years ago with some pleasure, and vaguely recall enjoying reading the other canonical Hawthorne novel (The Blithesdale Romance) in college (admittedly, also long ago). 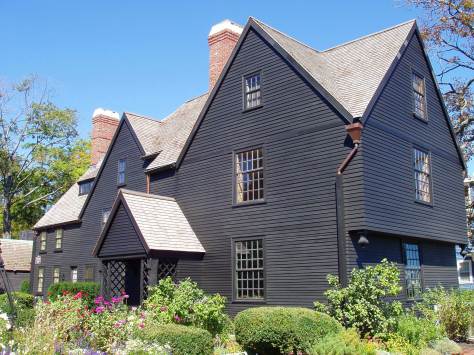 The House of Seven Gables is very, very verbose. If I were editing it, I would cut at least two-thirds of it, in particular one chapter (the 18th) of more than 6000 words that meanders round and round something that was perfectly obvious before the beginning of the chapter and remains unspecified in the 6000+ words. “Atmosphere” is the charitable interpretation. Padding is mine.

Despite the impatience which has afflicted me in reading all three of the pre-Civil War American literary masters, I could say that I liked The House of Seven Gables (unlike Walden which is insufferable to my 21st-century attention span or attention deficit.) The characters are more than a bit formulaic, the descriptive detail is beyond excessive, and after all the piling on of details, the ending seems almost perfunctory (and in the view of some—but not me—forced). 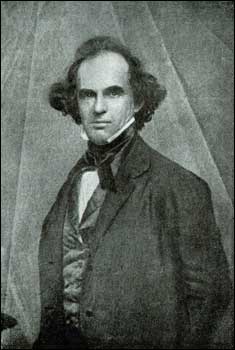 Hawthorne (shown ca. 1848) was haunted by the greed and intolerance of the Salem of his ancestors as Faulkner was haunted by the defeat of the Confederacy in the American Civil War. (Greed as well as guilt and long-smoldering rage intrigued both, too. And both produced some very long and winding sentences.) In The House of Seven Gables, Hawthorne wrote of the Pyncheon clan and the curse on its ancestral home (the seven-gabled house) because, in the seventeenth century, the lot on which the house was later built and a rare sweet-water well were taken from Matthew Maule over the latter’s insistent protests. Maule was condemned to be hanged (those convicted of witchcraft in Salem were hanged, not burned at the stake) by a judge Pyncheon who wanted the property (“real estate is the broad foundation on which nearly all the guilt of this world rests,” and Hawthorne was not even considering the still-earlier expropriation of the Native Peoples of Massachusetts!), and built the grand—but now-rotting and moss-encased—house.

The Pyncheon clan has not died out at the unspecified time (ca. 1840?) of the novel’s present, but has dwindled. There is a latter-day Judge Pyncheon who is a man of substance and has a son doing Europe. With a lifetime use of the house is a very poor relation, Hepzibah Pyncheon, a spinster whose poor vision has given her face a frightening appearance of a scowl. She is bearing the indignity of going into trade, opening a penny store, so that anyone might enter. Even worse, she must respond to the jangling bell on the door announcing the entrance of a customer.

Unexpectedly, a niece, Phoebe Pyncheon, shows up and brings her light into the dark, rotting house and floundering new shop. She cheers up the dazed Clifford and dazzles a lodger, daguerreotypist and sometimes mesmerist named Holgrave. (Aside: though a 19th-century shop is set up in the house in Salem, I cannot picture what gable Holgrave could have lived in. And if the words are unfamiliar, daugerreotypes were forerunners of photographs and mesmerists of hypnotists.)

How the present generation lives out the ancient curse is the primary content of the novel and is fairly ingenious. “The wrong-doing of one generation live into the successive ones” (“the sins of the fathers…”), but a way out is found in The House of Seven Gables (unlike the bleak ending of The Scarlet Letter). What happens is a variant of what happened before (absolution for the original sin? earned by Hepzibah’s long, lonely wait?). The first time clearly was tragedy. The second is not farce, but is romance (Hawthorne’s own label for the book), with a satisfying happy ending of leaving the cursed house behind. I think that Hawthorne adequately foreshadowed the resolution, so that I am not among those who regard it as forced. (Nor do Holgrave’s seeming change of opinions seem implausible to me, another complaint sometimes made about the novel). Besides, art was imitating life: Hawthorne, like Holgrave, changed his tune, found happiness with his own Phoebe, and left Salem on the proceeds (the year before) of the success of The Scarlet Letter. (His three masterpieces were published in the short span of 1850-52.)