“Cinéma noir” is a French term, often applied to mostly nocturnal movies showing the underbelly of American cities. Arguably (an argument I will make soon), the genre began with some French films directed by Marcel Carné and Jean Renoir in the late 1930s, rather than Hollywood movies of the 1940s.

The end and, especially, the beginning of “Quai des Orfèvres” (Jenny Lamour) do not seem in noir territory. For one thing, both are daylit. From the title, French audiences know and knew that crime was going to be involved. The “quay of the goldsmiths” is where Paris’s homicide investigators operate, so the title registers in the same way titling something “Scotland Yard” would. The movie does eventually get to very cold rooms on the Quai des Orfèvres, but begins in overheated rehearsal facilities, where some new songs for a music-hall revue are being rehearsed. The rising star is chanteuse Marguerite whose stage name is Jenny Lamour (played by Suzy Delair, writer-director Henri-Georges Clouzot’s significant other). Her conservatory-trained accompanist/husband Maurice (Bernard Blier) is exceedingly jealous. His jealousy seems pathologically intense but also not without justification. Jenny is a very friendly gal (it was the 1940s, OK) and very determined to rise further from her harshly impoverished childhood. 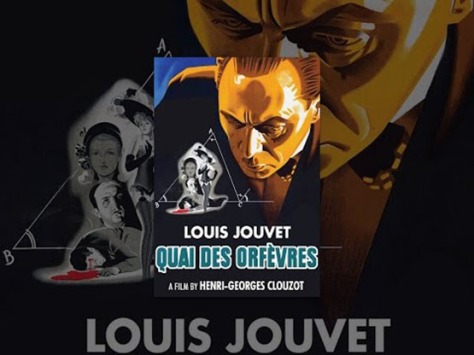 A hunchbacked, lecherous movie producer Georges Brignon (Charles Dullon) regularly brings attractive young women to Marguerite and Maurice’s downstairs neighbor Dora (Simone Renant) to be photographed in the nude (wearing only high-heeled pumps). Dora is a good friend to Marguerite, but pretty obviously wants to be more than a friend, though Marguerite is completely oblivious to this. Brignon finds Marguerite attractive and invites her to lunch with him. Maurice learns of this and storms into the private dining room to tell Brignon to leave his wife alone. Brignon remarks that jealous husbands usually appear after rather than before his dalliances, and Maurice tells him—in front of multiple witnesses in the employ of the restaurant—that if Brignon attempts any more trysts with his wife that Maurice will kill him. Marguerite laughs at Maurice’s jealousies and tells him that he is too stupid to get away with murder, that he could not construct an alibi.

There can’t be many filmgoers who at this point lack certainty that Brignon is going to be killed. Sure enough, Maurice finds Brignon’s home address written in lipstick. His setting up an alibi at another music hall with a girlie show (the standing-room audience is all men in their overcoats, but the seats have almost as many female as male occupants). When Maurice gets to Brignon’s house, Brignon is lying in a pool of blood, already dead. Thus, the audience knows that Maurice meant to shoot Brignon, but that someone had already killed him. And complicating matters further, Maurice’s car is stolen while he is inside, making getting back to the theater before the end of the show very difficult (which provides a raison d’être for a nocturnal slog through Paris streets).

The police, in the person of a stiff and fairly forlorn detective named Antoine (played by the great French stage star Louis Jouvet) grinds away at his three prime suspects: Dora, Marguerite, and (especially) Maurice. The movie has shifted from backstage shenanigans, to murder, to police procedural, with Dora, Marguerite, and Maurice attempting to cover up various incriminating evidence. Maurice is less tough than the two women. The police procedures are heavy-handed and the interrogation room has no heat. (The policemen wear overcoats but Maurice is in shirt sleeves.)

The detective has a son by some African mistress from his days in colonial Africa and this adds some interesting touches. Antoine has considerable world-weariness, but, like Joseph Calleia’s unvain Inspector Slimane in “Algiers,” is patient enough to get his man in the end.

There is a lot more plot, and rich characterization. There may be too much love and altruism for noir hopelessness, but Maurice feels doomed and suffers more than pangs of jealousy. 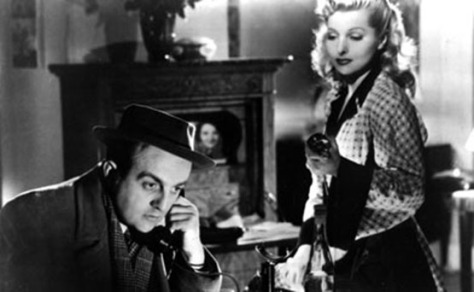 I think that the movie takes much too long to get going, that half the first half hour could easily have been cut, but after that, the unglamorous Paris and the very attractive Dora and Marguerite (with the unrequited lesbian passion recognized by Antoine) and the closing in on Maurice are very well presented. The cinematography of Armand Thirard is not as flamboyant as in some German and American noirs, but is atmospheric.

Clouzot is often referred to as “the French Hitchcock,” and “Quai des Orfèvres” includes not only an icy blonde (Dora) but the recurrent Hitchcock motif of the wrong man (Maurice is not innocent or very nice, but he didn’t kill Brignon…). Allegedly one of Hitchock’s aims in “Psycho” was to top Clouzot’s 1954 “Diabolique” (which also had strong lesbian undercurrents).

Clouzot was plagued by ill health, and had been banned from making films immediately after World War II, because of (false) allegations that the previous movie he directed “Le Corbeau” (The Crow) was shown in Germany as anti-French propaganda—even though it was banned by the Vichy government for portraying the climate of anonymous denunciations of Nazi-occupied France.

Until the botched Hollywood remake made “Diabolique” more difficult to see, it was Clouzot’s most famed triumph. Martin Scorcese propelled a re-release of “Le Salaire de la peur” (Wages of Fear) that was a great success. (Both were also lensed by Armand Thirard.)

The Criterion DVD of “Quai des Orfèvres” looks and sounds great. It includes a very well-done 17-minute segment from a1971 broadcast of “Au Cinéma Ce Soir” with recollections by Clouzot, Blier, Delair, and Renant. While acknowledging that Clouzot was demanding and at times intimidating, all three justify his harsh treatment and treasure the experience of making the film. (Clouzot was like Hitchcock in story-boarding every shot in advance, as well as in cowing actors.) Renant is very winning, and Clouzot is amusing and bemused talking about the source material (a pulp novel, Legitimate Defense, by Stanislas-André Steeman, whose L’ Assassin habite… au 21, (The Murderer Lives at #21) had also been the basis for a considerably changed 1942 adaptation

There is also a 3 1/2-minute French trailer, and a gallery of images of posters for the movie (in several languages). The white subtitles are enclosed, so that even those against white backgrounds are readily legible. Regrettably, I have not seen the essay by Luc Sante that was issued in the Criterion package.