Skillfully adapted by Isobel Lennart (1915-71, she wrote the play “Funny Girl” and the screenplays for “Anchors Away,” “The Inn of the Sixth Happiness,” “The Sundowners,” etc.) from Tennessee William’s Christmas comedy about adults with adult problems (consummating marriages, stagnating in boring jobs bossed around by jerks, managing neuroses and real estate…), the 1962 movie “Period of Adjustment” is remembered, if it is remembered at all, as a breakthrough role for Jane Fonda. It was also the first movie directed by George Roy Hill, who had directed it on stage and went on to direct “Butch Cassidy and the Sundance Kid,” “The Sting,” and “Slap-Shot” (all with Paul Newman). 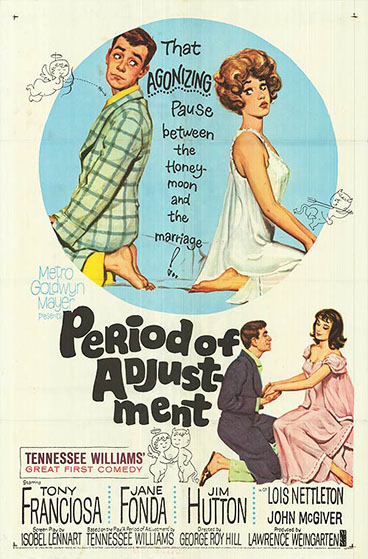 The first half hour of the movie shows events that are told in the stage-play: nurse Isabel (Jane Fonda) dancing attendance on George Whittaker (Jim Hutton) at a VA hospital, her chagrin that they are setting off from the wedding in a big, black 1939 hearse with 140,000 miles on it, and land in a bar with no other female customers, then in a dingy motel on their wedding night; and her outrage that George quit his job without telling her. The story of a quick romance and rocky start of George and Isabel’s marriage is intercut with Dorothea (Lois Nettleton) urging her husband Ralph (Anthony Franciosa) to apologize to her father (Ralph McGiver), who is his boss in a Memphis-area dairy company. Drunk the night before, Ralph had told his father-in-law what he really thought of him. Hung-over, Ralph is more than usually irritated by his son whom Ralph is alarmed will grow up to be a sissy.

Instead of apologizing, Ralph quits his job and Dorothea, who was visiting her mother (a smarmy Mabel Albertson), decides to stay in her parents’ house. With his own marriage and life in complete chaos, Ralph is happy to receive a visit from his Korean War Air Force buddy George and welcomes Isabel. Ralph is less disconcerted than Isabel that George drives off after depositing all of Isabel’s luggage except what she wanted, a zippered blue bag. Isabel sputters out her dismay about the marriage that has failed in every respect to match her dreams. Having been abandoned by a spouse toward whom he is ambivalent (having married her for the prospects of inheriting the family business), Ralph is soothing. (Isabel is not ready to be soothed. When Ralph tells her: “They don’t make them any better,” she retorts: “If they don’t make them any better than George Haverstick, they ought to stop making them!”)

When George eventually returns (with a bottle of champagne to share with Isabel, who does not drink…), Ralph tries to talk some sense into George, while George spins fantasies about returning to west Texas and raising stately longhorns. (Property and commercial concerns are almost as recurrent in Tennessee Williams works as couples clawing at each other: indeed, clawing for anticipated inheritances is a Williams leitmotif.)

Besides Dorothea’s parents’ eagerness to retrieve their daughter and everything they gave the couple, there is a group of male carolers agreeing to stop for a drink at each household until they are very rowdy, and a police station in which Jack Albertson calmly listens to charges of “planned embezzlement” (i.e., Ralph selling off some of the couple’s possessions). He sends everyone, including the inebriated carolers, home. Ralph drives the hearse and has it out with Dorothea in the front seat. There is an intercom turned on, so that George and Isabel hear the painful revelations. A certain solidarity against Dorothea’s parents merges with cringing at what they hear, and in the end, all four are trying to be more considerate of their partners (and of the other couple). They have learned some things about themselves and their partners, and—it being a romantic comedy, and a Christmas Eve one at that—the movie ends with optimism that the thin-skinned human beings will build on their hard-won insights and live less unhappily ever after.

Although Fonda seems to me to overplay, the part calls for silliness and a hysterical breakdown (when calling home to Daddy). Her accent is consistent; whether it is Texan, I will leave to others to assess. It seems more Southeastern to me, as does Franciosa’s. Franciosa is very good in a nuanced portrait of a man who loathes himself for selling himself to a man he detests and for failures as a husband and father. (Franciosa was near the end of a half-decade string of good screen roles that began with one in Isabel Lennert’s screenplay for the charming romantic comedy directed by Robert Wise “This Could Be the Night”).

Jim Hutton was good at screwball comedy and at the spluttering vulnerability often called for in screwball comedy leads and the cover of brutality for insecurity often called from in Tennessee Williams plays. John McGiver naturally looked puffed-up and was a master of pomposity. Lois Nettleton was affecting in the difficult role (of a kind Geraldine Page played in other Williams plays and films) of a woman whose mousiness and lack of pulchritude disappointed her parents and who is painfully aware of that she was “saved from spinsterdom” without much love.

I think that Lennart and Hill did an excellent job of taking the play out from its one set, of showing some of what the stage George and Isabel tell, of getting Dorothea onscreen more and much earlier than she gets onstage, providing additional motivation for Dorothea’s father’s resentment (specifically, that he played the part of sh_t-eating son-in-law to get the business himself), keeping the best lines, and pruning dull patches from the play. Paul Vogel’s black-and-white cinematography is crisp with some deep-focus echoiong Gregg Toland’s (in “Little Foxes,” another play set in the South about greed and marital ambivalences).

(The meaning of the line I’ve taken for my review’s title, as explained by Ralph, applies widely in William’s work: “If you took the human heart out of the human body and put a pair of legs on it and told it to walk a straight line, it couldn’t do it. It never could pass the drunk test.”) 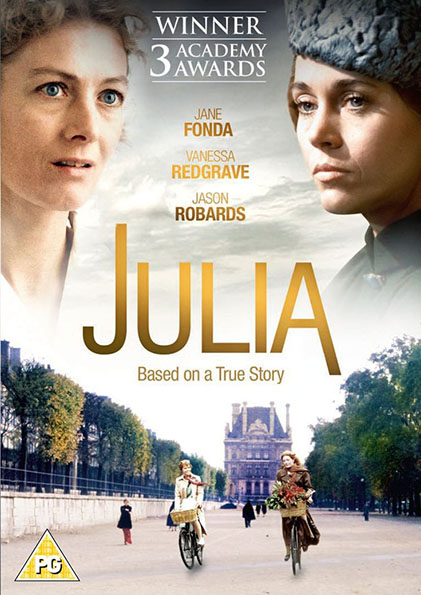 In 1977, when distinguished film director Fred Zinnemann (born Jewish in the Hapsburg Empire, educated in Vienna, working in Berlin before Hitler came to power) directed “Julia,” a melodrama celebrating Lillian Hellman carrying money hidden in her hat to Nazi Berlin to her childhood friend and ca. 1934 part of the resistance to Hitler inside Germany. “Julia,” the story was presented (and widely) taken as nonfiction. Hellman’s disingenuous self-glorification (in the 1976 Scoundrel Time) for standing up to the House Un-American Activities Committee in 1952 (in a way that Arthur Miller had, but she had not). Her 1973 memoir in which the yarn appeared, Pentimento, had not been publicly challenged.

On a Dick Cavett Show appearance in 1979, Mary McCarthy said of Hellman: “Every word she writes is a lie, including ‘and’ and ‘the’.” Although obviously hyperbolic, McCarthy and Cavett and the PBS station where the broadcast was recorded were sued for defamation. That Hellman had significantly misrepresented her HUAC appearance and had never even met the model for Julia (Muriel Gardiner) came out, though the case was not dismissed because the judge did not think Hellman was a public figure after decades of public stances, four purported memoirs, and had appeared in a Blackglama fur advertising campaign with the tagline “What becomes a Legend most?” and no (need for) identification of the model (poseur). Considerable doubt was cast on the veracity of Hellman’s account of her relationship with Dashiell Hammett (author of  “The Maltese Falcon” and “The Thin Man”), too.

In 1984, Samuel McCracken reported “that the funeral home in London where Hellman said Julia’s body was sent to did not exist, there was no record that Hellman had sailed to England to claim Julia’s body on the ship she said she had made the transatlantic crossing on, and there was no evidence that Julia had lived or died. Furthermore, McCracken found it highly unlikely, as did Gardiner, who had worked with the anti-fascist underground, that so many people would have been used to help Hellman get money to Julia, or that money would be couriered in the way that Hellman said it did.”

Seeing the movie again knowing that insofar as the story has any connection to historical realities, they are purloined from Gardiner (whose memoir had been in the hands of Wolf Schwabacher, who was also Hellman’s lawyer) detracts from being swept up in admiration for the heroism of Julia, and the reflected glory of Lillian’s expedition, but the journey to Nazi Berlin is, with “Day of the Jackal” (1973) and, indeed, “A Man for All Seasons” (1966), an example of Fred Zinnemann’s ability to generate suspense in viewers who know the outcome is. Dick Sargent won an Oscar for best adapted screenplay and Walter Murch was nominated for his editing.

I find the adolescence flashbacks to Lillian’s admiration of Julia harder to swallow than the suspense movie. They are mawkish and also involve inflation, in this instance making Lillian’s bosom best buddy an English aristocrat, though Hellman grew up in America (New Orleans and New York City). To paraphrase McCarthy, there is much false in every aspect of Helmman’s portrait of “Julia.” 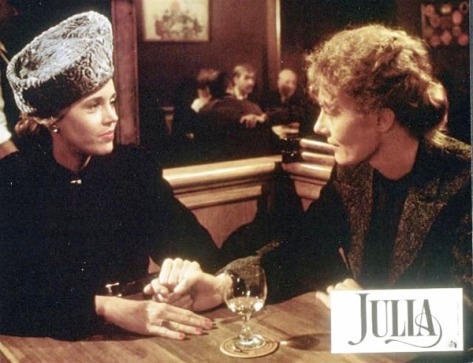 The young Julia and young Lillian were played partly by Vanessa Redgrave and Jane Fonda (respectively), partly by Lisa Pelikan and Susan Jones. Redgrave won her best supporting actress Oscar primarily for the Berlin restaurant scene in which she receives the money and asks Lillian to care for her infant daughter if something happens to Julia. (The daughter, of course, is another Hellman fantasy, along with the death of the Anglophone in Berlin resistance figure.)

There was a campaign against awarding an Oscar to Redgrave because of her support for a Palestinian state. I think that Redgrave should have won an Oscar later for her performance in “Howard’s End,” but question her win for “Julia” for reasons other than her politics. The competition, however, was not intense; Jason Robards’ Dashiell Hammett won in a stronger field (including Maximilian Schell in “Julia”) for best supporting actor. (Sargent also had weak competition.)

The 40-year-old Fonda and Redgrave (both were born in 1937) playing scenes as a youth in their early 20s requires willful suspension of disbelief. But I also find Fonda as a frustrated writer difficult to believe (though throwing her typewriter out the window is something I remembered form seeing the movie on its original release). Moreover, Fonda was far too beautiful to be credible as Hellman of any age. (As Annie Hall, Diane Keaton won the best actress Oscar for which Fonda was nominated.)

I think that “Julia” was/is overrated, though Zinnemann’s mastery is underrated. (He only made one more film after “Julia,” “Five Days One Summer” (1982), which I have not seen.) BTW, it was a question about overrated writers that stimulated Mary McCarthy’s slam of Hellman. IMHO, the problems with “Julia” are in the source material, which was not known in 1977 and might not have been  known late had Hellmann not sued.

Zinnemann’s previous movie, “Day of the Jackal” was based on a novel based on a real assassination plot and is great fun.