Philip Kan Gotanda’s play “The Wash” was first staged in San Francisco’s Eureka Theatre in 1987. It is the most straightforward (straight ahead rather than jumping into flashbacks or dreaminess) and least specifically Japanese-American of the work by Gotanda with which I’m familiar. The first two stage productions and the 1988 movie adaption directed by Michael Toshiyuki Uno had Japanese-American actors, though a San Francisco reincarnation made the characters Jamaican American (with Carl Lumbly taking the part Mako had played in the movie).

There are three settings (that can coexist on a stage): the family home where only the 68-year-old patriarch (Nobu Matsumoto) continues to dwell. Masi, his 67-year-old wife of many decades continues to come in once a week to take Nobu’s dirty clothes and to return those she has washed. 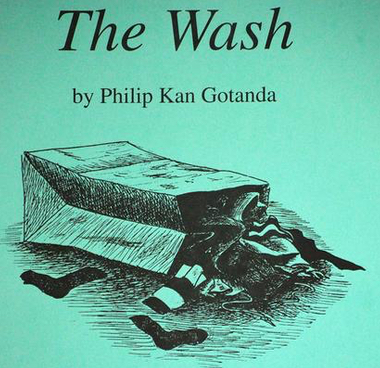 He has not accepted that their marriage is over. Masi had not sought a divorce when she moved in with their older daughter, Marsha, but has been seeing a very kindly 65-year-old Nisei widower, Sadao. Over the course of the play Masi decides she wants to marry him.

Meanwhile, Nobu has been sort of seeing the fifty-something owner of a small Japanese restaurant, Miyako, a widow who was born in Japan and married a GI who brought her to the US. The “sort of seeing” is mostly eating her tempura. Miyako seems to have some interest in a relationship with the crotchety older Japanese man, but he has not thought of himself as potentially on the romance or marriage market: he is already married.

The younger daughter, Marsha, is estranged, having wed a black man, which it anathema to her father.

Summarizing interviews (the Yonsei) Gotanda did with older Nisei women, he noted that “Nisei women have no dreams of their own. They live their lives in order to help their husbands realize their dreams, and the dreams of their children.” Masi tentatively goes against her socialization into the self-denying role, and seeks fulfillment for herself (not least sexually, having been spurned sexually by her husband for years).

The liberation arc and the male inability to adjust are familiar, making the play predictable—and transferable to other ethnicities (with aleration of the food references). “The Wash” is a solid play, and was, no doubt, the first play (and movie) with a geriatric Japanese Americans breaking out of lifetime subordination to giri, which is to say to the needs of others.

(The play was published separately and in the 1995 Fish Head Soup and Other Plays with an introduction by Michael Omi.)