Born in the Bavarian Alps in 1944 (too late to remember anything of World War II) and long a professor at second-rate English universities, W. G. Sebald wrote a series of essayistic fictions illustrated by grainy photographs he took of mostly peopleless vistas or of odd documents. His books have been rapturously reviewed in the Anglophone world, less rapturously in reviews in his native language. His “novel Austerlitz, which I found unreadable, won a National Book Critics’ Circle Award after Sebald’s death in 2001 in an automobile accident. 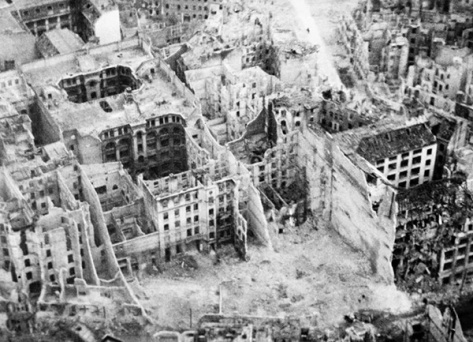 In 1998 Sebald lectured in Zurich on what he heard as a loud silence about life in the Third Reich as the US Air Force attempted to level German’s cities (choosing saturation firebombing civilians to aiming at military targets in Japan, Germany, and Austria). When I visited Berlin six months ago (and other German cities earlier), I was puzzled by the completeness of reconstruction. In photos from just after Germany’s surrender in 1945 and in the backdrop of several movies I’ve seen or reseen in the last year (Germany, Year Zero; The Search; Foreign Affair) it looks that in vast expanses of German cities there were no roofs left. Now it looks like there are many pre-WWII buildings, and I don’t know whether this is more the preservation of the facades of the buildings or reconstruction.

Although the postwar German looking forward to reconstruction rather than backward to destruction is his topic, in On The Natural History of Destruction Sebald does not touch on my preservation/replication puzzle. His puzzle is the failure of natives and alien visitors to cognize the extent of destruction: “About six hundred thousand German civilians fell victim t the air raids and three and a half million homes were destroyed; at the end of the war seven and a half million people were left homeless, and there were 311.1 cubic metres of rubble for every inhabitant of Cologne and 42.8 cubic metres for eerie inhabitant of Dresden—but we do not grasp what it all actually meant. The destruction, on a scale without historical precedent, entered the annals of the nation only in the form of vague generalizations as Germany set about rebuilding itself…. It has largely been obliterated from the retrospective understanding of those affected.

Sebald’s title is what Lord Zuckerman intended to write when he went to survey the destruction immediately after the war, but he found himself unable to write of his impressions. Similarly, on their returned from American exile, Thomas Mann and Bertholt Brecht barely noted the destruction in their post-exile writings. Fellow Nobel laureate Heinrich Böll was an exception in writing a novel about the experiences of civilians in the last year of the war, but it was not published for another forty years

After Sebald’s lecture (which was published in German in 1999), the then-living German winner of the Nobel Prize for Literature, Günter Grass published a novel focusing on civilian casualties from 1945 (Soviet bombing of a ship of refugees) that has just appeared in English as Crabwalk and Jörg Friedrich’s Der Brand) (“The Fire”) has been a best-seller in Germany. Grass contends, against Sebald, that the memory of feeling impotent and frightened has been passed down to younger generations and explains the massive German opposition to Bush’s Iraq adventure.

Although I understand the importance of testimony, that is, records of what it was like to live through traumas and admire such works as Before Night Falls, Land of the Green Ghosts, Loss Within Loss, and Diary of a Political Idiot), I understand that most people would rather block memories and get on with trying to (re)build lives than examine just how horrible their trauma was, and that other observers feel inadequate to the task (as, for instance, Lord Zuckerman did in making his way through the rubble). My impression of holocaust literature is that more of it has been produced thirty-plus years after the liberation of concentration camps than during the immediately following decades.

In addition to the general reasons for not picking at psychic scabs, there are two reasons more specific to the obliterated Third Reich for Germans not to have written (extensively) about destruction of German cities. The first is guilty conscience: ”We actually provoked the annihilation of the cities in which we once lived” by initiating air attacks on civilian populations (first in Guernica during the Spanish Civil War, most memorably in the London blitz) and by the attempted “final solution.” The second is that any discussion of German suffering is seized upon by neo-Nazis (or unreconstructed ones still alive) as an apologia for Nazi modes of operation. Sebald writes at considerable length (and with withering scorn) about some of the letters he received from Germans expressing the view that Germans were the primary victims of World War II.

Sebald’s expanded Zurich lecture was published in German with an essay on the postwar German writer Alfred Andersch. The American edition also includes essays on Jean Améry, an Austrian Jew who joined the Resistance, was tortured and sent to Auschwitz and who wrote the kind of specific, dry cataloging of what he saw that prefigured Sebald (as in the quotation above), and playwright Peter Weiss (Marat/Sade) whose “The Investigation” incorporated testimony from war crime trials concerning Auschwitz.

Sebald tended to ramble (literally in The Rings of Saturn), as I complained in reviewing Vertigo, Natural History is somewhat miscellaneous, but like Emigrants consists of variations on a discernible theme (exile in that, experiencing the losing end of WWII here).

Sebald was a discerning literary critic and has interesting things to say about all the writers he discusses. His surprise at their number being small seems exaggerated to me in that the factors I’ve mentioned were known to him, and I’m puzzled that a writer so obsessed with photographs does not discuss the documentary and fictional films showing the rubble and the rat-like behavior of Germans living in holes.