I think that Barabbas, Swedish Nobel Prize-winner’s 1950 novel, was his best known work even before it was the basis for a Biblical epic movie made by Dino Di Laurentis with Anthony Quinn in rhe title role. The book begins with the freed prisoner skulking to watch the crucifixion of the man the crowd chose to be crucified, Jesus called the Christ. Barabbas recognizes one of the two thieves crucified with (besides) Jesus and is struck by the woman who is obviously the mother, filled with sorrow but not crying. The disturber of religious orthodoxy is frail. Barabbas knows he will not last long and is appalled that the Romans superintending the crucifixions offer a sponge dipped in vinegar when Jesus asks for water.

Barabbas is terrified by the mid-day dark an earthquake that was not noticed by those who hang out in his favorite tavern. He sounds out some believers in the crucified one and is puzzled by their faith that he will be resurrected. He befriends a young believer with a harelip who gets herself stoned for preach the Christian heresy, knifes the man who cast the first stone, and later removes the girl’s body from the pit where she was killed.

It’s not clear to me in the novel how Barabbas is condemned to Roman sulfur mines from which no one emerges alive. His weaker partner (they are chained together), Sahak is a Christian, eager to hear from someone who saw the Savior. They are reassigned to pull plows like oxen, and eventually chosen by the Roman governor(‘s wife) to accompany him into retirement in Rome.

Sahak refuses to renounce his god and is crucified. Barabbas watches again. He tracks down Christians meeting in catacombs and eagerly participates in Nero’s burning of Rome. That is blamed on Christians. The nonbeliever Barabbas is the only one who takes enthusiastic part. The Apostle Peter explains to him why Christians do not make war in the name of their religion, and Barabbas is crucified with many Christians. He is the slowest to die, and, unlike Jesus has no group watching in solidarity.

I think tat the movie made several improvements on Lagerkvist’s stripped-down prose. First, it shows Pontius Pilate giving the crowd a choice of which condemned prisoner will be release. In a spectacular sequence (which may not be an improvement) it shows Barabbas dragging Sahak (played by Vittorio Gassman) to the surface when an earthquake destroys the sulfur mine. After the same transition through field labor to being part of the retiring governor’s household in Rome, the two are cast into gladiator school. There they are particularly hated by the master (a slave who has risen to training and supervising the other gladiators), Torvald, who is played with full-throttle malice by Jack Palance. Torvald kills Sahak is killed by Torvald (after the executions throw their spears around the required target) for refusing to renounce his god, and in a scene not in the book, Barabbas and a net go against the arrogant and vicious Torvald in a chariot. This is quite an exciting action sequence in which Torvald is outsmarted and eventually dragged around behind his chariot by his frenzied horses. 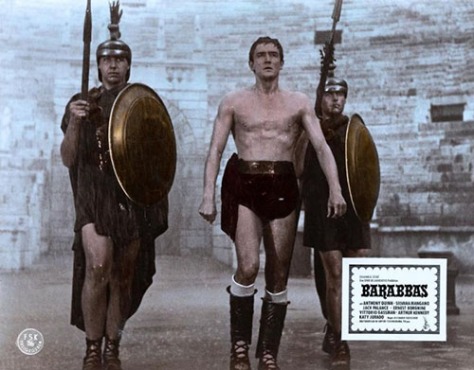 Barabbas is lost in the catacombs. When he emerges the city is burning. He adds some torches and is crucified in a tableau (as in “Spartacus”). Barabbas wants to believe in the new religion that he only partly understands, but dies a martyr to the faith he would like to have, but doesn’t quite have.

Quinn as the brute intrigued by the man (regarded by Christians as the son of god) is quite good, as is Gassman as the frailer (but not frail) believer with whom Barabbas bonds during twenty year’s brutal mistreatment underground and continues to associate even after they are no longer chained together. Palance was over-the-top but appropriately so, Aldo Tonti’s color photography was notable, and there was some early electronic music in Mario Nascimbene’s score.

This is a part of a re-examination of one of my adolescent self’s favorite writers, which is also includes The Sibyl (my favorite) and The Dwarf. It is also an example of movie being better than source book. Losing the interior reflections of an unretrospective and unanalytic  character was more than compensated for by big spectacles, including the final crucifixion field.