“Männer” (“Men”, 1985, directed by Doris Dorrie, 4.3/5 stars) is a welcome relief form the all-enveloping depression of the middle-period Fassbinder movies. It is a romantic comedy in which a husband who finds out that his wife has been having an affair leaves, spies on the man, manages to become his roommate, becomes his confidant, and transforms the semi-hipies into an advertising executive who bores his wife. A gorilla mask is used effectively and the ending is very funny.

“Erleuchtung garantiert” (Enlightenment Guaranteed, 2000) is almost as funny as “Manner” (Men). Like her 1985 movie, this one focuses on two highly contrasted German men with relationship problems. Uwe (Uwe Ochsenknecht, who was also in “Men” and other Dörrie films and looks more than a little like Kelsey Grammer) is a cranky kitchen-remodeling salesman with three noisy young children for whom he has little tolerance. Gustav (Gustav-Peter Wöhler who was in Dörrie’s 1998 “Am I Beautiful ) is a geomancer (feng shui practitioner) and Japanophile who has been looking forward to going to a Zen monastery in Japan to find inner peace, being very out of tune with his feelings and being a perfectionist who comes nowhere close to perfection.

Different as they are in appearance and temperament, Uwe and Gustav are brothers. Both of them are dissatisfied with their lives (Uwe having a more serious midlife crisis, but less aware that he is having one that Gustav is). For reasons that could not be revealed without spoiling the funniest part of the plot, Uwe, who has always scoffed at Gustav’s interest in Buddhism and things Japanese, goes along. Gustav’s considerable frustration with how Uwe acts and thinks makes having Uwe along horrifying to Gustav, but blood is thicker than something or another. (There is some quite beautiful water later, BTW.)

Despite misadventures in Tokyo, they get to the monastery, where Gustav in particular has more problems and frustrations, while Big Brother fits in without any major problems or irritations.

The other monks are patient and helpful, genial and cheerful, with only a few having a smattering of English as a lingua franca. The monastic routines are filmed in detail. I was amazed that a monastery would allow a female film-maker such access. In a DVD bonus interview, Dörrie explained that a condition of being allowed to film in the monastery was that the whole crew (which included another woman) would follow the rigorous monastic discipline.

The two German men in the Monzen monastery is more or less a documentary, though they were acting in a fictional story. Uwe had a video camera and I think that both of them improvised at least some of what they recorded themselves or each other as saying. I think there is too much of this inthe movie, however.

In Munich, in Tokyo, and in Monzen there are some very funny moments (involving furniture, a miniature rock garden, a tent, wiping techniques, etc.). Filming with hand-held digital cameras was, Dörrie, explains not at all unusual in Tokyo, so that Hans Karl Hu seemed to the Tokyoites to be shooting “home movies” rather than a movie for theatrical release. 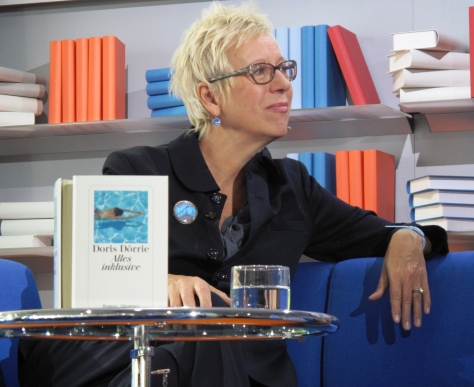 The subtitles in the movie are clear (both visually and grammatically). The translated interview has some grammatical problems (it scrolls by rather than Dörrie speaking; I thought she spoke fluent English when she was here [the San Francisco International Film Festival] with “Men”). The questions are rather fatuous, too. The only other bonus features are one-page (partial) filmographies of Uwe and Gustav.

The hitman comedy blended with a romantic comedy in writer-director Uchida Kenji’s 2012 “Key of Life” came together very late (if at all). Amnesia as a basis for anything requires considerable suspension of disbelief on my part, but Kagawa Tereyuki (Devils on the Doorstep, Yureru) was quite sweet in trying to recover memory of a life that wasn’t his, that of broke actor Sakurai (Sakai Masato) who took his money and life before discovering that the life was that of a feared hitman, Kondo, whom his clients never saw. The workaholic, hyper-orgnized career woman played by Hirosue Ryôko (Dapartures) would strain credulity if she were American, but she’s Japanese, and “Key of Life” is a screwball comedy, or contains a lot of screwball romcom. She has picked a wedding date without having even a candidate to be the groom.

Uchida takes his time in setting up the lonely lead characters and complications, but the time (128 minutes, four of them closing credits) is IMO well-spent.

The yakusa+civlians comedy “Adrenaline Drive” (1999) is funnier, but the characters in “Key of Life” are more developed. Both include unlikely romantic couplings. Plus, he ersatz Saikaku gets cast as a gangster, a role that the real Saikaku has to play for higher stakes (three or four lives, including his own). 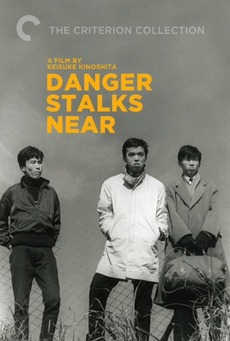 I thought that Kinoshita’s 1957 “Fûzen no tomoshibi” (titled in English Danger Stalks Near/ Hanging by a Thread/ A Candle in the Wind) was going to be a sort of Japanese “The Ladykillers,” but the (pictured) three thieves watching a house they plan to rob is pretty much a MacGuffin. The traffic in and out of the house is very considerable, in part because the husband, who works in a shoe store for 7000 yen a month has just won a 50,000-yen camera.

His wife has to deal with his very difficult, miserly mother (Tamura Akiko [the mother in Kinoshita’s 1951 “Boyhood”]) and a young son who is sick, as his grandmother claims to be when it suits her purposes. Plus a servant who is fired for leaving an iron on a tatami mat while she is off reading in the bathroom, a sinister classmate (Nanbara Kôji) of the husband, who drops by and flatters the grandmother, a greedy sister, and various tradesmen (bill collectors, mailman, two messengers from local stores).

There is a lot of buildup, and a tumultuous, satisfying climax. The payoffs are funny, though the sitcom difficulties along the way are not especially funny. In the eye of ther storms, Takmine Hideko was frustrated, but not suffering at a soap opera level, more like a less affluent housewife in the Donna Stone (Reed)/June Cleaver mode, if frumpier (with unflattering glasses), having to deal with (OK and participate in!) lots of passive aggression, greed, scheming, and seething resentments.

There’s an unusual amount of long shots, frequently providing, the view of the three juvenile delinquents waiting for the house to be less filled with people so they can rob it.