Though I repeated the claim that Henri Cartier-Bresson is “the father of photojournalism,” I think there are other contenders, such as Walker Evans. But for “the mother of photojournalism,” I think that Dorothea Lange (1885-1965) has a lock. I saw a screening of the 1995 documentary “Dorothea Lange: A Visual Life” directed by Meg Partridge that was followed by a Q&A session with the film-maker, her sister Elizabeth (author of a book with the same name), and their father Rondal Partridge, who was photographer Imogen Cunningham’s son, Lange’s assistant during the 1930s, and appears onscreen within the documentary.

The film primarily looks at Lange photos with audtiotaped interviews done in Lange’s last years for KQED (the San Francisco Bay Area’s public radio and television station) and for the Berkeley Oral History Project. In some of these audios, Lange was talking about the photo that the movie camera pans. In others, the film-maker (presumably with input from her father and sister) chose apposite images. There are also stills of Lange, most taken by Rondal Partridge, and interviews of him and some others who knew Lange well. As far as I recall, there is no movie footage of Lange or of her two husbands, painter Maynard Dixon and rural sociologist/economist Paul Taylor.

The documentary that springs to (my) mind for comparison is “The Impassioned Eye” with Henri Cartier-Bresson filmed looking at images he recorded and talking about the circumstances of shooting the photos. The onscreen co-operation of Cartier-Bresson was an advantage not available to Partridge in the case of Lange. It is offset by (1) Lange not being dubbed into English (but speaking it), (2) Lange being far more articulate and self-conscious about what she was trying to do than Cartier-Bresson, and (3) “A Visual Life” being more a moving(-camera) picture than “The Impassioned Eye,” which is a glorified slide show. The Cartier-Bresson documentary is a great slide-show of Cartier-Bresson photographs (and a few drawings he did). “A Visual Life” uses the camera moving over old photos that is central to the documentaries Ken Burns has made.

The vertical dimension of most of Lange’s photos is greater than the horizontal, whereas movie cameras are wider than high. Meg Partridge was acutely keenly aware of the problem (I know that she was from her being able to figure out what I was trying to ask about film composition differing from still-camera composition!)* and showed the whole photo (Lange’s composition) before zooming in or panning up or down through Lange’s photos (what I’d consider Partridge’s compositions using Lange’s images). I think that Partridge’s compositions are very fine and prefer movies to slide shows. Plus the Lange audio plus Lange video portions are interspersed with footage in which the viewer can see lips moving (talking heads).

I think that the choices of images and interviews are excellent and that the 46-minute documentary provides an excellent overview of Lange’s photography with some insights into the difficulties a female professional and mother had in the “man’s world” of (first) studio portrait photography and (then) documentary photography. 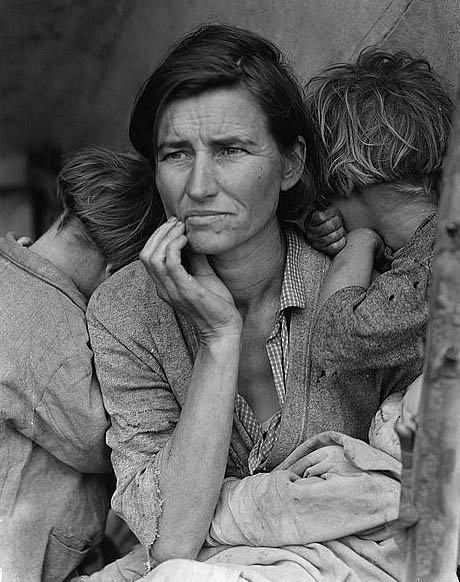 Lange’s best-known photographs is the “Okie Madonna,” a mother who was one of those driven west from the “Dust Bowl” erosion during the Great Depression, and of a San Francisco breadline. The human costs of the mechanization of agriculture and the displacement of people (farmers wiped out during the “Dust Bowl,” black cotton sharecroppers becoming factory workers during WWII, the removal of Japanese Americans from the Pacific Coast to concentration camps inland) were what Lange documented most extensively — and intensively (and much of the displacement she documented was occasioned by mechanized/corporate agriculture overwhelming yeoman farmers).

Despite debilitating physical problems, including a leg the growth of which was stunted by polio contracted when she was seven, Lange made many striking photographs and, despite her focus on the downtrodden, managed to get support (from the New Deal federal government and later projects for Life and Fortune magazines). “A Visual Life” shows some beautiful photos of people from Lange’s post-WWII travels with Taylor as well as her better-known documentation of California Central Valley economic refugees and the rounding-up of Japanese Americans.

In the Q&A, Rondal Partridge forcefully presented his view that photography is documentation, not art (which is not, he added, to say that a photograph cannot be beautiful or artfully composed). I don’t see that the two are necessarily opposed. I’m not sure whether Lange thought they were, but I think that many of her photographs are both.