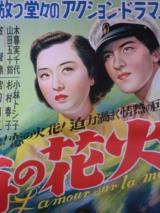 Kinoshita Keisuke shot two movies between “Carmen Goes Home” (1951) and its sequel “Carmen’s Pure Love” (1952). The historically more important one, is “Shônen-ki,” called in English “Boyhood” (by Janus-Criterion-Hulu”, “A Record of Youth,” and just “Youth.”“Fireworks Over the Sea” (a direct translation of the title of Kinoshita’s 1951 “Umi no hanabi”) is a rather overstuffed melodrama of Japanese self-sacrifice with opening and closing daytime fireworks as a pair of fishing boats go out to seat cheered on by a crowd on shore, four fight scenes, two scenes in a Catholic church (with no pews or pads for those kneeling and praying), at least four iterations of an a capella “Ava Maria” (in Japanese: I could hear “Ave” but not “Maria”) by a very cheerful adolescent male Christian, two dutiful daughters willing to be married to bail out their father’s failing fishing company, a pair of brothers from Nagasaki who take over captaining the two boats after corrupt local ones are fired, a geisha trying to find out what happened to her fiancé during the last days of WWII, a younger brother cavorting (more as a pet than a lover) with his older brother’s wife, etc.

I found it difficult to keep all the romantic complications straight, though the difficulties of the fishing company with restive investors and declining fish prices and a lack of governmental support for the enterprise that it had initially encouraged were clear enough, as the director, Kamiya Tarobei (the ubiquitous Ryû Chishû) struggled to support the fishermen and captains he employed and safeguard the investment of relavitely wealthy fellow residents of Yobuko (on northern Kyushu). He is reluctant if not altogether unwilling to sell of his younger daughter Mie (Kogura Michiyo) to raise more money. She is in love with Kono (Sugimura Haruko) who goes about town and is the recipient of gifts from his sister-in-law (Kishi Teruko), while her husband/his brother Tamihiko (Sada Keiji) loafs around the flat above the store in Tokyo, to the distress of his mother (Kinoshita regular Higashiyama Chieko). The other dutiful daughter, Miwa (Kastsuragi Yôko), is in love with one of the captains from Nagasaki.

There are a lot of scenes on boats, mostly in the Yabuko, Saga harbor, and some bus travel, but eventually there are shots of trains to please me. In general, Kinoshita’s brother and usual cinematographer, Kusuda Hiroshi, did good works both in interior compositions and in exteriors. Kinoshita Chûji’s music is incongruously bouncy, with sentimentality provided by the repeated “Ava Marie.” Kinoshita Keisuke was, reportedly (by Audie Bock), eager to wrap the picture and go off to France to meet René Clair.

There is implicit social criticism of the abuse of women (the geisha most manifestly, but also the daughters ready to sacrifice their futures to loveless marriages). And the national bureaucrats (of the Fishery Ministry) are heartless, refusing to talk to the delegation from Yabuko until Kamiya Tarobei has a heart attack on the third day of waiting in its office in Tokyo to plead his company’s case.