I was  disappointed by the second of Friedrich Dürrenmatt’s three short detective novels, The Quarry (Der Verdacht, also published as Suspicion, 1951), which brings back the terminally ill Berne police commissioner Barlach from The Judge and His Hangman. While hospitalized, he happens to see a photograph in an old issue of LIFE magazine showing a concentration camp doctor operating without anesthetic. Barlach’s physician, Hungertobel, blanches on seeing the photo and admits that there is a strong resemblance (including a scar) to one of his colleagues, who has become the head of a clinic for the rich outside Zurich. 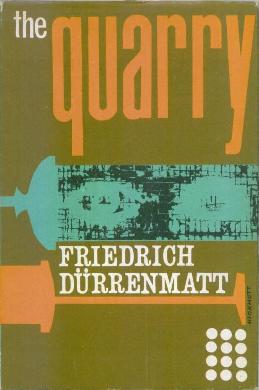 At the policeman’s insistence Hungertobel arranges for Barlach to be transferred to that clinic on New Year’s Eve, an extremely rash way to conduct an investigation of someone suspected of torturing patients (dating back to service as Dr. Nehle in the Third Reich). The suspect, who has the detective de facto imprisoned and set to be another person who does not survive surgery, and an associate who had been a concentration camp prisoner before becoming his mistress, speak freely—and metaphysically—with Barlach.

There is little suspense, though a deus ex machina is set up skillfully (albeit the character is quite outlandish a one). Careful planning by characters in Dürrenmatt’s work generally runs aground on unexpected coincidences, but in this instance the plan is very poorly conceived. Commissioner Barlach’s flexibility in The Judge and His Hangman (1950) was much reduced in the sequel. A later just-retired detective still pursuing justice (in the third Dürrenmatt detective novel, The Pledge) is a better example of Dürrenmatt’s leitmotif “The more human beings proceed according to plan, the more effectively they may be hit be coincidence,” and both of those other two detective novels are superior to The Quarry.