I think that Croatian-Canadian author Josip Novakovich (1956-) is the greatest living writer of short stories. He has also published powerful collections of essays and what I consider The Great Croatian Novel, April Fool’s Day. 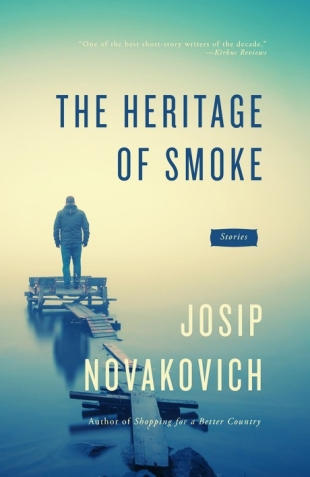 This high esteem does not mean that I like everything he writes. Indeed, I hated the last story in his 2017 collection Heritage of Smoke, “In the Same Boat,” the only one not set in Europe or North America (but on the Pacific Ocean south of the US/Mexico border). And I didn’t much like the penultimate story, ‘Remote Love,” which centers on inventor Nikola Tesla (1856-1943), who was born in a Serbian village in what is now Croatia (but then was part of the Hapsburg/Austro-Hungarian Empire), attended high school in German in Karlovac, which is also now in Croatia, moved on to Vienna, Prague, and, eventually New York, where Novakovich’s story is set.

Enough about stories I disliked. I think that “Acorns” is a great work, centering on a UN translator who is disgusted by the complicity with Serbian genocide of the UN “peacekeepers,” has very harrowing adventures as a prisoner of a Serbian unit, and after finding her husband who has come searching for, spends months in a Bosnian unit. Living in the aftermath of rape is one important aspect of the story—not just for Ana.

The title story, which centers on an unexpected inheritance is the funniest story in the collection. The humor is not entirely dark, as, for instance that in “White Mustache” is. It recalls brothers who were swept up (drafted) by opposing forces during WWII, the fascist Utashas who outdid the Nazis in atrocities, and the anti-fascist partisans (chetniks). Both militias forced young men into their ranks (as later, in El Salvador). Let’s say that the narrator learns why his elderly relatives believe in ghosts…

“Be Patient” in which a child is overdosed with experimental (American) measles vaccine and gets her wish to adopt a dog only posthumously. “Dutch Treat” is an example of the maxim “No good deed goes unpunished,” when a Dutchman named Martin who had been among the UN “peacekeepers” unknowingly aided Serbians (Army of Srpska) to massacre Croatians at Srebrinca in 1995. In New York City he meets a man who remembers him from there and then. His aid gets him in very serious trouble in NYC.

“When the Saints Come” is more typical American short story fare about the dissolution of a marriage, though set mostly in Jerusalem. “Eclipse Near Golgotha” goes back the crucifixion of Christ, focusing on the unrepentant thief crucified beside Jesus. “The Wanderer” grew up in East Jerusalem and passes through Croatia.

“Strings” is a mock-heroic tale of multi-ethnic (Russian, Swiss-French, Croatian) students exterminating a rat. Soccer hooliganism provides a background for some more very dark humor in Ideal Goalie” and the sardonic, surprising “Crossbar,” which also involved grizzly bears given the Zagreb zoo by (Clinton-era) America.

There is a lot of displacement, a lot of wariness, more than a little violence in Novakovich’s stories. Though disdaining any objective history, the characters (OK, especially the Serbian ones) nourish ancient grudges against “Turks,” which they take out on Bosnian Muslims. (Bosnians converted to Islam during Ottoman times, but were not Turks.) This has continued with Albanian Kosovars (the vast majority of the people in Kosovo, though Serbs used to dominating everyone else within the Yugoslavia they claim to perpetuate as one region after another breaks loose).

Though I recommend stopping at page 182, there are alternately horrifying and moving stories before that point. In particular, I think that “Acorns” should have a very wide readership, by no means limited to those interested in what happened in Bosnia, since similar things continue to happen in “civil wars” in various places.

(BTW, after many years teaching in the US, the author of Shopping for a Better Country  moved on to Concordia University in Montréal in 2009.)