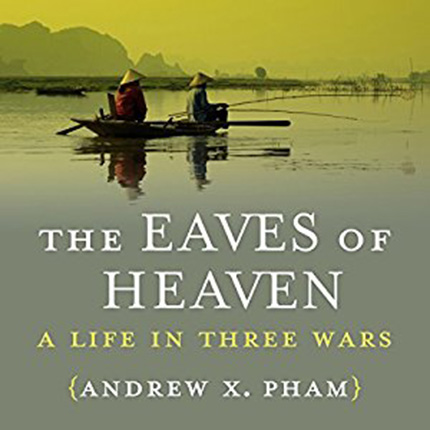 I was not the only reader who was very impressed by Andrew Pham’s combination memoir of fleeing Vietnam as a child and returning and bicycling across it as a young adult: Catfish and Mandala won the 1999 Kiriyama Book Prize.

Pham’s Eaves of Heaven (nominated for a National Book Award) is a memoir in his father’s voice as written in English by his son. Thong Van Pham, lived in way too interesting times (to borrow from the Chinese curse): he was a child during the Japanese occupation, the son of rural gentry in northern Vietnam during the war for independence from French colonialism, drafted and later recalled to the South Vietnamese (ARVN) military. 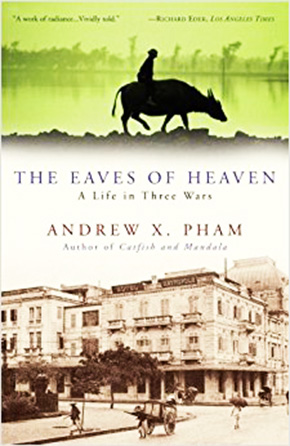 Readers of memoirs by Americans (A Rumor of War) and North Vietnamese (Sorrow of War) who fought in the third of the elder Pham’s three wars have expressed considerable contempt for the skills and valor of ARVN troops. The senior Pham recalls great frustration at the corruption and failures of will and imagination of commanders (not least one who left his unit to be slaughtered), but also valor of some frontline ARVN soldiers (also see Perfume Dreams).

I wonder if his analysis of communist domination of the Viet-Minh fighting the French in the 1950s was as clear then as in retrospects, though I incline to believe that the US abandoning the government it had put in place (violating the Geneva Accords for a nationwide election, then greenlighting the coup against the Diems, greenlighting excluding Gen. Minh from the last RVN presidential election) was unthinkable to those who had fought on the American side of Pham’s third war.

The book ends after a stint in “re-education” prison before the Phams became boat people fleeing Vietnam (horrors covered in Catfish). Life in rural northern Vietnam during Japanese and French occupation and during the war of Independence, life in Hanoi before the French left, life in Saigon and in the ARVN, and in “re-education” prison are all vividly portrayed. The cutting back and forth seems distracting to me, though time and place for each chapter are specified. I would have preferred a chronological structure. Would the reader fail to notice the recurrence of brutalities, of fleeing and rebuilding, if the chronology was straightforward? I don’t think so.

The action scenes, notably a fight that an Algerian legionnaire forces a peasant into and the Vietcong attack on the paramilitary force Pham commands, are very vivid, as is the bitter taste of communist purges of nationalists within the anticolonial struggle of the early 1950s.

The book is not at all a rant. There are comic incidents, love stories, vivid characters, as well as the horrors of torture and battle. Pham recalls his mother (who died in childbirth at the age of 31) telling him that “the eaves of heaven had a way of turning in cycles, of dealing both blows and recompenses.” The balance seems to me uneven; to amend Wright Morris slightly: real losses and temporarily imagined gains.

[In addition to collaborating on this book, the Phams collaborated on translating Last Night I Dreamed of Peace: The Diaries of Dr. Thuy Tram.]