For being a writer-director who did things his own way, with minimal budgets and production values… and for being quite flamboyant, Samuel Fuller (1912-1997) has long been a favorite of auterist film critics. Although I think major defects in his work have been ignored by those mesmerized by Fuller’s personality, I also think that there are almost always some things of interest in his movies. 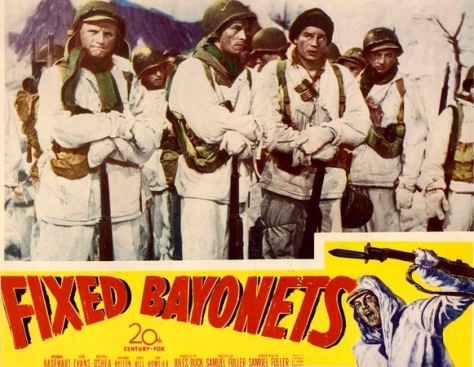 I also think that, in 1951, while the Korean War was still raging, Fuller made one of the very best movies set in that conflict, “The Steel Helmet” with Gene Evans as a crusty sergeant. Later that same year, Fuller wrote and directed “Fixed Bayonets,” which also has as a crusty WWII-veteran sergeant. In both movies, the lieutenants are killed and command devolves down. In both movies, very small detachments of US soldiers are holding off the communist Chinese hordes. In “Fixed Bayonets,” a platoon is left to hold a pass while the division retreats and is supposed to “sound like a division.”

The situation is pretty much a replay of Thermopylae in the snows of the Sierra Nevadas (that are supposed to be Korea). The movie begins with fulsome thanks for cooperation from the US Army, and the first line spoken is that “it takes more than brains to be a general in the United States Army, it takes guts.” This is not a view expressed with much frequency by those on the front lines, and I felt that I had been given notice that Fuller (a WWII infantryman) was producing propaganda.

Much of the rest of the movie involves a corporal who had been in Officer Training School and is unable to shoot enemy soldiers or give commands being turned into a killer and leader of men. There is one private, Jonesy (Pat Hogan), who saw Cpl. Denno (Richard Basehart) not fire at an oncoming Chinese soldier and who expresses contempt openly for Denno. Sgt. Rock (Gene Evans) is aware that Denno is terrified of taking command and prepares him as well as he can, recognizing that Denno has brains and guts along with crippling self-doubt. 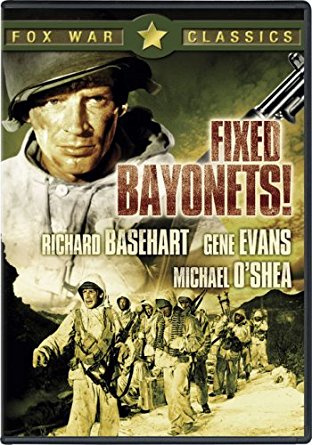 Some of the action scenes are quite good and Basehart was great at playing ambivalence. There is, however, much that is very predictable in the plot (can anyone with any familiarity with Hollywood ear movies doubt that Denno is eventually going to be in charge and rise to the challenge?). Even at the length of 92 minutes, the movie drags—particularly for a round of internal monologues from soldiers who have not been distinguished from each other before (except for the know-it-all “Whitey” played by Skip Homeier, grown up from “Tomorrow, the World!”). There is also a puddle of water that is presumably very cold in a cave that everyone stomps through, rather than skirting. The studio cave also has some very phony-looking stalactites.

There are no DVD extras on the Fox release, but the cinematography of Lucien Ballard (who later shot “The Wild Bunch” and other Peckinpah films) is preserved/transferred to disc. The great(er!) “Steel Helmet” has alsobecome available on DVD (Criterion Eclipse, so also without any bonus features).

Entirely BTW, it seems to me that the command is “Fix Bayonets!” so that I don’t understand the exclamation in the descriptive title “Fixed Bayonets.” (Bayonets are attached to rifles at least twice, but only one of them is used.)

And James Dean is supposed to have had a bit part, but, if so, I missed it, and suspect that it was cut. (The soldier who says “Who goes there?” near the end cannot be Dean, nor can either of the other two men on guard with him by the river.)