One of the most surprising WWII movies projects is the 2006 one almost entirely in Japanese that Clint Eastwood directed and co-produced,, “Letters from Iwo Jima” (Iōjima Kara no Tegami), the companion piece to his “Flags of Our Fathers” (which is more about the post-combat experiences of the US Marines in the iconic photo raising the US flag at Iwo Jima, which we now know was a staged reraising…). Surprisingly, the movie in Japanese did better at the US box office than the one in English had, as well as receiving more critical acclaim. (And it did very well in Japan, being #1 at the box office there for five weeks.)

The movie opens in 2005, excavating buried letters then flashes back to 1944, when Pvt. Saigo (Kazunari Ninomiya), a baker in civilian life with a wife and young daughter rashly advocates surrendering to the numerically (and in firepower) superior US marines. Captain Tanida (Takumi Bando) beats him for this offense, though Tanida is stopped by the newly arrived commander, Gen. Kuribayashi Tadamichi (Ken Watanabe), who does not want to waste men like that.

Kuribayashi learns that the Japanese fleet he has counted on for support (or evacuation!) has been destroyed. Kuribayashi knows the beach will be taken, and has his troops dig in (tunneling supplementing the caves already of Mount Suribachi on the island). 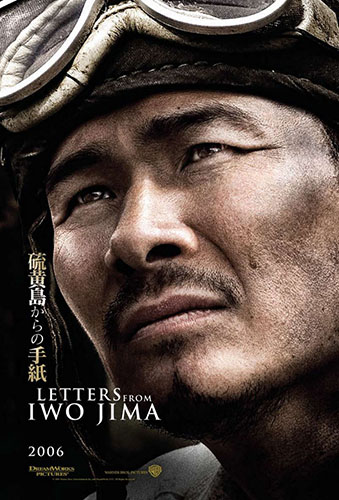 The movie shows the Japanese infantrymen as regular guys who wish that they were home, yet are often courageous, while showing a very authoritarian (not to mention suicide-drenched) officer culture, even for a military culture. Though Gen. Kuribayashi tells his men not to kill themselves but to kill the enemy, he is not immune to the cult of the noble death and of suicide rather than surrender. And the whole exercise of defending the island (with undertrained as well as underarmed troops) is suicidal (the Japanese running out of ammunition and food, having to subsist on a diet of worms). (It is grim, but not in comparison to the Japanese movies occupying the top slots on my list!)

BTW the movie was mostly shot in inland California (around Barstow) with only one day shooting on Iwo Jima. Though shot in color, the color is so washed out that it often seems to be in black and white.

Eastwood was nominated for the best director Oscar, he and Steven Spielberg for best picture. The sound editing won the Oscar and Iris Yamashita and Paul Haggis were nominated for bext original screenplay (somewhat strangely in that it is heavily based on Gen. Tadamachi’s posthumous “Gyokusai sōshikikan.”