“Yureru,” (2006, written and directed by Nishikawa Miwa) which has been rendered in English as “Sway” (though “swaying” or “shaking” would have been more conventional translations) has some strong resemblances to “Rashômon” (1950) in that there are four (or, arguably, five) accounts of what happened on an outing in the country (Hasumi Gorge in this case). Unlike in Rashomon, the four (or five) accounts come from only two people, the brothers. 29-year-old Takeru (Odagiru Jo [Bright Future]) the scruffy prodigal son who went off to become a fashion photographer in Tokyo, returns for the one-year anniversary memorial for his mother, disruptively late and not wearing a dark suit. The older brother who stayed home and works in the family business (a gas station) Minoru (Kagawa Teruyuki [Tokyo Sontata]), is 35.

Also working there is Cheiko (Maki Yoko) who had spurned the chance to go with Takeru when he left. It is not clear that she is even aware that Minoru is in love with her and that Takeru is not, though he swiftly beds her his first night back in town.

The three go on an outing to Hasumi Gorge, where they went multiple times as children. Minoru had a fear of heights and avoided the swinging suspension bridge. As he had when he was a child, Takeru climbs up from the bed of the swiftly moving but not deep stream, crosses it, and is taking photographs on the other side, when Cheiko follows him and Minoru follows her. 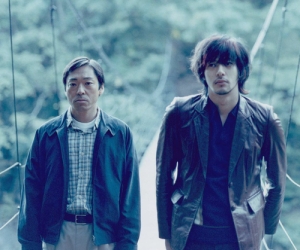 Neither of the latter two make it across the bridge. Cheiko drowns after falling or being pushed off the bridge. How much of what happened Takeru saw is unclear. First he claims to have seen nothing. He rushed up to join Minoru, who was clutching a support on the bridge and instructed him to tell the police Cheiko fell. 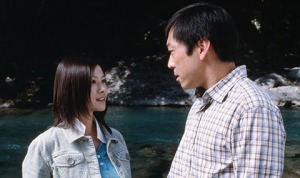 Minoru tells the investigators that (offscreen), but later confesses that he pushed her. Then in court he provides a more complicated account of trying to steady her, being rebuffed, and watching her slip off the side. There were marks on his arm consistent with her slipping from his grasp that no one comments on (there are also scars on the inside of his wrists that suggest he had tried to commit suicide at some earlier time). I also wonder why Takeru did not go to try to pull Cheiko out before she drowned (the fall did not kill her).

Takeru tells a new (not least to his uncle, Minoru’s defense attorney) story at the trial, and the movie’s ending is very ambiguous. I find not knowing what really happened in “Sway” far more frustrating than it was in “Rashômon.” Minoru is the only one living who knew what happened, but it is impossible to tell which version he presents is accurate, or to sort out his guilt feelings. One thing that is certain and that he says is that she would not be dead if he had not followed her onto the bridge that he had avoided his whole life until then.

It is far easier to sympathize with the shy and dutiful Minoru than with his arrogant and totally undutiful younger brother, though the one who did not deserve what happened is Cheiko (who might have been planning to go with Takeru this time).