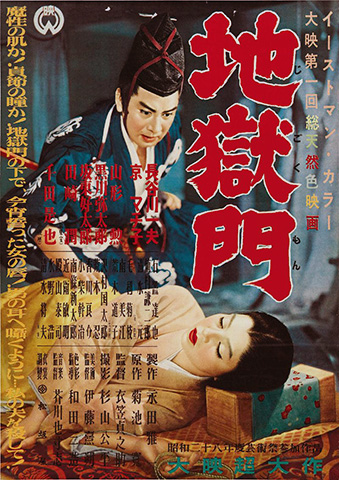 “Jigokumon” (Gate of Hell), directed by the veteran film-maker (and former onnagata silent-film actor) Teinosuke Kinugasa (1896-1982), was one of the movies from Japan in the early 1950s that awed film-lovers in the rest of the world (following Kurosawa’s “Rashômon” and Mizoguchi’s “Ugetsu,” also starring Machiko Kyô). Unlike most of the canonical Japanese classics of the 1950s, “Jigokumon” was in opulent color. The court and warrior costumes were so impressive that the generally very ethnocentric voters of the Academy of Motion Picture Arts and Sciences chose to award it the Oscar for costume design for a film in color (the first technical award given to a film not in English, I think). It was also selected best foreign-language film (before that was a formal category) by Academy voters and by New York film critics, and received the Palme D’Or at Cannes.

“Jigokumon” still looks very impressive. It seems that many of the films (none of them new) I’ve seen of late have been more impressive visually than dramatically. In the middle of watching “Jigokumon,” I thought it was another film to add to that list. The dramatic gears grind slowly between a flamboyant beginning and an ending that retrospectively justifies the slow-seeming middle (relatively slow: the whole movie only take 86 minutes) and surprises expectations. I certainly do not want to specify what happens, or, more to the point, what is said at the end. In no sense is there a trick ending: the surprise is more cerebral than physical.

Even allowing for cultural differences between 21st-century America and 12th-century Japan, the plot is somewhat perplexing. The first part is straightforward enough. While the military commander who is also a monk is gone, a rebellion within the palace in Kyoto occurs. The defenders of the regime need someone to impersonate the empress and to draw off attackers so the real empress can slip out. Lady-in-waiting Kesa (Machiko Kyô volunteers and dons an extraordinary golden robe not just belonging to but signifying the empress.

The samurai in charge of getting Kesa to safety Moritoo (Kasuo Hasegawa [A Kaubuki Actor’s Revenge, Crucified Lovers]) has to face down his brother who has joined the rebels. The escape to Moritoo’s home is hokey and the failure of the rebels to seize the woman they think is the empress is inexplicable. (Also, the viewer does not learn what happened to the real emperor and empress). After Moritoo carries the news to the commander, Lord Kiyomori (Senda Koreya) and catches and slays a spy, the rebellion is put down. It seems that “Jigokumon” is a samurai film about an early period of unrest (the declining Heian period, ca. 1160), but in one of those scenes in which samurais and officials kneel motionless as decisions are announced, the genre shifts from treachery and swordplay to stubbornness and erotic obsession.

The commander (shogun?) asks Moritoo what he wants as a reward for his role in putting down the rebellion—anything but the commander’s head or that of his family. What Moritoo asks for is Kesa. When informed that she is already married, he refuses to drop his request and the commander can neither deny nor grant it. To save his face, Moritoo should withdraw the request, though underlings could be (imperatively) “asked” to break their marriages (this is central to the later masterpiece “Samurai Rebellion” which also focuses on unseemly stubbornness defying everyone’s expectations). 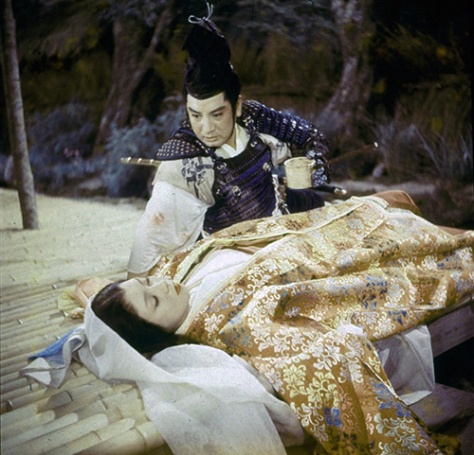 Lady Kesa is mortified and feels that she must somehow be to blame for the outrageous request, but her very dignified husband Wataru (Yamagata Isao [Samurai Rebellion]) does not blame her or take the bid for his wife particularly seriously. Moritoo persists and behaves more and more outrageously (all the more so judged by the samurai code). Why he is not transferred to some far frontier or ordered to kill himself (or trapped on one of his forays) is inexplicable to me, but honor is eventually upheld (albeit in unexpected ways, as I’ve already noted).

The married couple is placed in a position that they find untenable and I find hard to believe could happen in a courtly society with extremely rigid rules of decorum. The plot requires more suspension of disbelief than I can muster and there is practically no revelation of motivation of the characters through most of the movie. I don’t think that “Jigokumon” is a great movie (as “Ran” or “Sanshô dayû” are), but it is a very impressive one, particularly visually. The opening battle and the horse race are especially striking, as is Wataru’s final speech are especially noteworthy, as are the cinematography of Mizoguchi regular Sugiyama Kôhei and Wada Mitsuzô’s costume design.