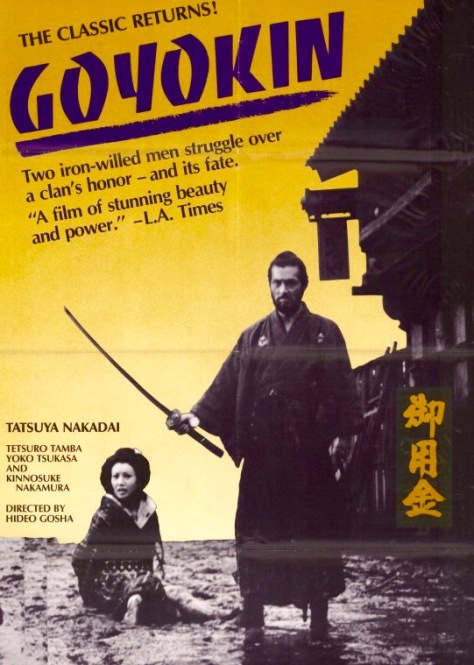 Gosha Hideo’s 1969 “Goyôkin” (released with its Japanese title in Engish, and also titled “Official Gold” (a translation of the Japanese title) and “Steel Edge of Revenge,” is sort of the opposite of rebel samurai movies, though it shares the frequent villain of those movies, a corrupt official, Rokugo (Tanba Tetsurô). It is more akin to the movies in which a samurai or samurais aids and protects common folk (Seven Samurai, Sanjuro). The hero is Magobei, played by Nakadai Tatsuya. He is employed by the Sabai clan.

The nearby island of Sado mines gold, which belongs to the Tokugawa clan (the shoguns’ clan). After a ship loaded with gold sinks and the local (to Kurosaki on the Shimokita Peninsula) peasants salvage some of it to return to the Tokugawas, Rokugo seizes it for himself and slaughters the peasants who knew of the horde. Magobei contents himself with his superior (master), who is also his brother-in-law, promising to go and sin no more, that is, never to do it again.

Magobei moves to Edo (the future Tokyo). When assassins come for him, he realizes that Magobei is going to steal more official gold and goes to intervene. With the aid of a young samurai who was supposed to kill him, Fujimaki Samon (Nakamura Kinnosuke) and a local brother and sister (Asaoka Rurikô and Hura Ben), Magobei averts the shipwreck. Not without serious injury, Magobei proceeds to the inevitable one-on-one fight with Rokugo. It is gorgeously shot in the snow. 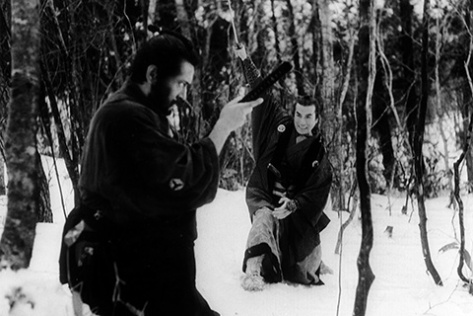 As usual, Nakadai is intense—and, as often, sullen and ferocious (with a thick beard). Here he portrays an entirely honorable samurai opposing a greedy villain, having let his childhood friend/ superior officer/brother-in-law off once. The purloined gold recalls “Sword of the Beast” set a few decades later (“Goyokin” is set in the 1830s).

The source material (film) has not been remastered, and the colors tend to be a bit oversaturated, but the images are mostly not muddied by age. Okazaki Kôzô’s (Kaseki) outstanding cinematography mostly endures.

(Trivia: Mifune Toshirô was originally cast as Samon, but after shooting had begun had an ulcer and dropped out of the production. Nakadai was reunited with his onscreen wife from Kobayashi’s “Samurai Rebellion” Tsukasa Yôko.)