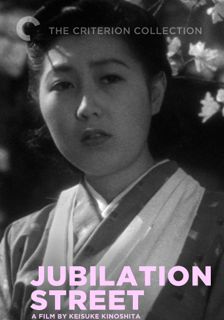 I don’t think that Kinoshita’s1944 , “Jubilation Street” (1944) is nearly as good as his 1943 first one (Port of Blossoms). Both portray rather tight-knit communities, though “Jubilation Street” is a Tokyo neighborhood rather than a fishing village. The inhabitants are being involuntarily relocated—not to get them away from the ruthless firebombing of Tokyo, which had not begun yet, but for the government (a euphemism for “military”) to use the land for its own, undisclosed (either to the characters or to the viewers) purposes.

Uehara Ken plays the ingenu again in love with Moto Mitsuko, as in “Port of Blossoms” and “The Great Magoruku.” This time he played a very pure-hearted test pilot, Shindo. The mother of his beloved objects to the marriage Shindo’s mother attempts to arrange because his job is too dangerous and because his father ran off ten years earlier. (Anyone who has seen more than a few movies knows that the father will show up over the course of the movie, though not what will ensue from that return).

The owner of the local bathhouse is reluctant to leave, while a printer is quite ready to move, though sorry to leave behind the printing press that supported his family for two generations. Etc.

The movie is very talky, was shot on a single set (though there is a Japanese movie downpour (not as much of a gale as the one in “Port of Blossoms”), lacks any of the satire of “Port of Shadows” (and later Kinoshita comedies) and, as usual for Kinoshita movies except the first one, which featured boats, trains are shown. There is some of the shooting from above that would recur in later Kinoshita movies (not quite a “God’s eye” view, but above the characters, quite unlike the setup at eye level of a kneeling adult of Ozu movies).

There is a final patriotic exhortation, but the movie until then is rather melancholic about the disruptions of the community caused by the war that Japan began (first in China, then elsewhere, including the attack on Pearl Harbor). I’m surprised not only that it passed the censors at a time of all-out military mobilization around the time Japan stopped winning and started losing the war.

(Kinoshita Keisuke wrote the screenplays for most of his movies, but not “Port of Flowers” or “Jubilation Street.”)

A somewhat damaged print of the movie with more damaged sound is available in the Criterion Eclipse (#41) box set of Kinoshita’s first five movies, “Kinoshita and World War II.”