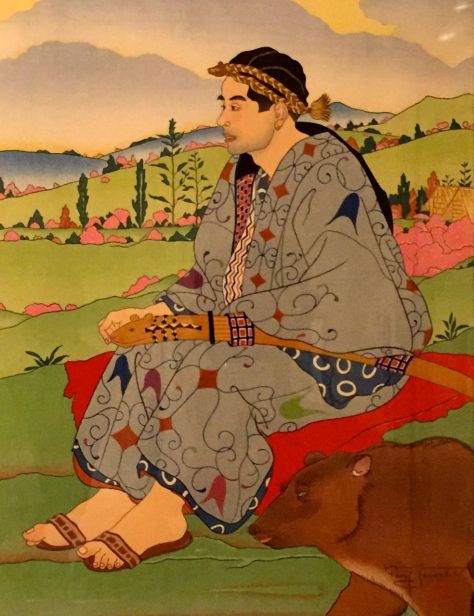 Whenever I am in Honolulu (every few years), I go to the Honolulu Museum (formerly Academy) of Art. It has a wide geographic range, but has particular strengths in Chinese, Japanese, and Islamic art. It was the beneficiary of novelist James Michener’s collection of Japanese woodblock prints (ukiyo-e), long on Hiroshige and Hokusai. I was momentarily startled last week that the room was filled by prints by someone with whose work I had been totally unfamiliar.

Paul Jacoulet (1902-60) was born in Paris, but lived in Japan from the age of four onward. His father taught at Tokyo University. Starting in 1920, he worked for the French Embassy in Tokyo as an interpreter. He had begun painting at the age of eleven and was keenly interested in Noh and Kabuki theater traditions.

In 1929 he made his first foray (his mother inspired by Gaugin’s Tahitian paintings) into the “South Seas,” favoring Yap in Micronesia. He began woodblock printing in 1934, though most of his work from before 1939 was lost in a fire. His prints have A LOT of colors, requiring up to sixty woodblocks (he claimed 300) and the most skilled Japanese craftsmen to execute his designs. 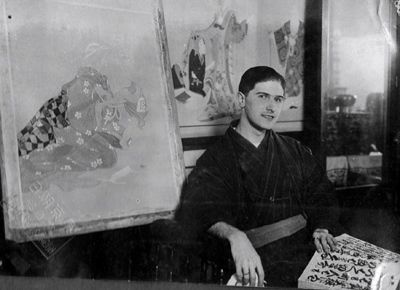 Whether the subjects are Micronesian, Japanese, Korean (or, more rarely, French), there is rarely more than three people represented, and most often one.

Apparently his lost work was more realistic than what is extant (166 different prints in total). The prints on display and others of which I have seen images are somewhat stylized, not as art deco as some of Doug Simonson’s paintings, but somewhat similar to them with very muscular males and (unlike Simonson’s) dainty faces on both male and female subjects.

French-born, he was not classified as an “enemy alien” during WWII, but was cut off from buyers outside Japan and suspect in the ultra-nationalist Japan of the early 1940s. He moved to the countryside (Karuizawa in Nagano prefecture in the middle of Honshu) and supported himself by selling on the black market vegetables and poultry he raised.

He died at age 58 of diabetes complications. 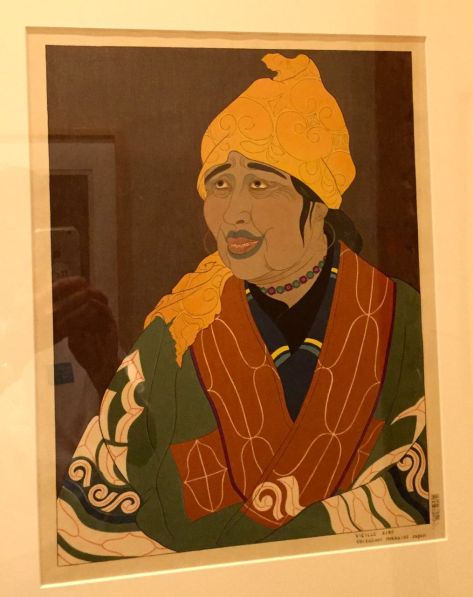 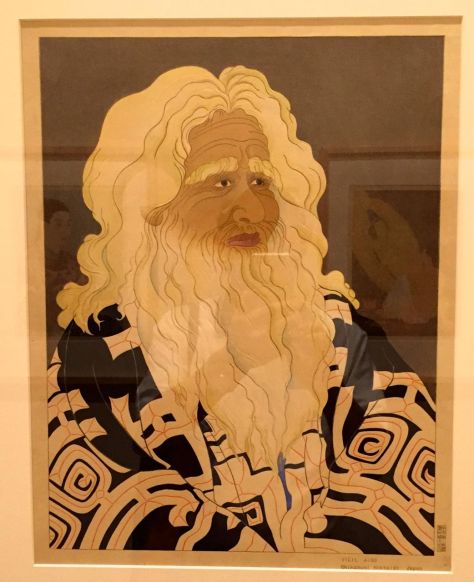 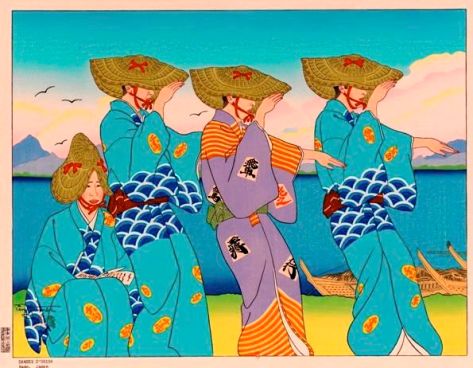 My posting My posting here includes three prints of Ainu (from the northernmost island, Hokkaido) from and one of osekaza dansers. There brief video (in French) from a 2013 Jacoulet show at the Paris Musé du Quai Branly at https://www.youtube.com/watch?v=SaG8QN-pTRE

a richly illustrated article (also in French) inspired by that show at http://www.lesdiagonalesdutemps.com/article-paul-jacoulet-au-musee-du-quai-branly-115886739.html

and an also brief interesting process video at