Ichikawa’s 1958 film “Enjo” (1958) has been variously titled in English “Conflagration,” “Flame of Torment,” and “The Temple of the Golden Pavilion.” The last is the usual translation of the title of the Mishima 1956 novel that it illustrates, the Kinkakuji temple in Kyoto that was burned down in 1950 by a 22-year-old novice monk. It is very hard to formulate any common themes or to find any visual pattern in the Ichikawa films I’ve been able to see, though the despair of “Enjo” is at least somewhat connectable to the defeat and destruction of the war of “The Burmese Harp” and “Fires on the Plain.” 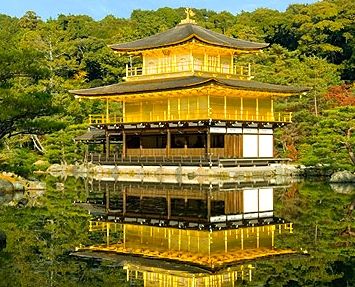 When I saw it for the first time long ago (on a date!), I thought that the film aimed to make the audience forgive the very antisocial act of burning down a “national treasure,” the exquisite ancient temple that had survived American fire bombing of Japanese cities. Watching it again on video(tape; it’s not, alas, available on DVD), I think that Mishima thought that the stuttering boy who destroys what he loves more than anything (or anyone) else—the temple—was justified, because it was being profaned by ignorant and unreverent tourists and by an abbot whose mistress bears a son the night that Mizoguchi Goichi (Ichikawa Raizô) sets the fire. Mishima himself was given to excessive reactions to what he considered the trampling of what he considered the glories of Japaneseness, culminating in his theatrical suicide.

There is also the Buddhist perspective, which may be that attachments, especially attachment to things, make attaining enlightenment impossible. Against such musings is the lack of enlightenment—and even of the prime Buddhist virtue of compassion—of any of the characters.

That Goichi burns down the temple is established at the very beginning (so noting it is not a “plot spoiler”!), because he is in police custody, not responding to interrogation. The flashbacks begin with him bearing a letter from his father to the abbot Tayama Dosen (Nakamura Ganjiro, who was an Ichikawa core trouper {An Actor’s Revenge, The Key]) who had been a friend since student days of the elder Mizoguchi. The abbot takes the now-fatherless boy in, provides for him, sends him to school, and considers him a possible successor despite Goichi’s painful stutter. The abbot is very disappointed in Goichi, and Goichi is very pained by what the abbot believes are his failings. (The abbot reflects on some of his own failings and sees the conflagration as due to his sins and unfitness as its custodian.)

Goichi is shy and venerates the temple more than anything else, including any possible vocation as a priest. He forms a fairly insidious relationship with a nihilistic, crippled student Tokari (Nakadai Tatsuya [who also starred in “The Key”]). He suffers inarticulately, but visibly. If he were an American teenager in 2016, he might go on a killing rampage. He is the 1950s, Japanese version of the puzzle of violent lashing out. Except, as I said, I am less convinced now than I was the first time I saw “Enjo” that Mishima and Ichikawa consider it senseless violence. I still feel sorry for Goichi, and perhaps it is a latent pyromania in me that find the conflagration of that old, polished wood quite beautiful.

More likely, it is the cinematography of Miyagawa Kazuo. Most of the film is very dark (and I remember this being true when I saw it projected, so it is not the video transfer)—dimly lit, but in sharp focus. The scenes are beautifully framed. I don’t remember any camera movement, and frequently there is very little movement of the actors either. Miyagawa filmed some of the greatest of Japanese films, including “Ugetsu” and “Sansho the Bailiff” for Mizoguchi. “Rashomon,” “Yojimbo,” and some of “Kagemusha” for Kurosawa. Thus, he did much to define the look of classic Japanese films, at least the American canon of classic Japanese films. (The Japanese I meet know nothing of these films. It’s not that they have an alternate canon of postwar Japanese films, but that they cannot conceive of anyone being interested in old black and white films. Perhaps, I meet the wrong Japanese, and there are admirers of the heritage of the great masters—though Donald Richie, the person most responsible for introducing Japanese art films to American audiences, agreed with me when I recently asked him] Mishima also seems better known in America than in Japan now.

The film may be a meditation on vandalism and isolation or on the dangers of attachment. There is a plot and some action, but the main reason to see “Enjo” is its visual brilliance.

(The real arsonist, Yoken Hayashi, attempted suicide, but survived to be tried and sentenced to seven years imprisonment, He was released in 1955, because he was considered mentally ill (shizophrenci) and soon died of tuberculosis. The abbot of the rebuiltpavilion asked that the movie not use the old name, Kinkauji, which had been Mishima’s title. The official name is now Rokuon-ji, “Deer Garden Temple.”)